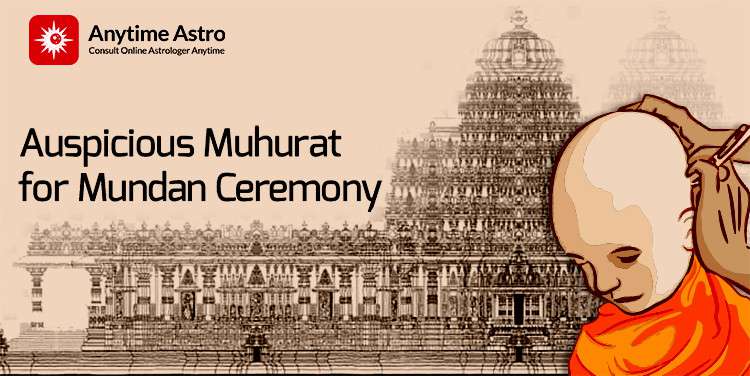 Will Your Child Be Wise And Healthy?

Mundan Sanskar is one of the sixteen Sacred Sanskars (Shodasha Samskaras) that are mandatory in the Hindu religion. It is the eighth and significant purification ritual that is said to be performed in Shubh muhurat for Mundan to bestow good luck and prosperity in the life of a child. Mundan Sanskar is also called Chaul Mundan, Jadula or Chura Karam or Chaul Karma Sanskar in some Hindu communities.

What’s in Store for Your Child?

Mundan Sanskar is a Hindu tradition to tonsure the hair of a child for the first time after birth. A Mundan Ceremony is always performed in the most auspicious Mundan Muhurat at the age of 7, 9 or 11 months. Some people prefer to do it at a later age between 1-3 years. The Mundan Sanskar of a girl is called Chaula Karma and is performed in the even years.

As per Hindu traditions, the tonsure or Mundan Sanskar on Shubh Mundan muhurat purifies a child from its past birth sins and negativities. A soul attains a human form after passing through 84 lakh Yonis with each having a certain impact on human birth. Shaving of a baby's head purges the past sins and liberates him/her from all the obstructive influences. According to Yajurveda, Mundan ceremony or Sanskar is a very significant Karma in enhancing the wisdom, health, age, strength, and agility of the child.

Most Auspicious Days for Mundan Sanskar

Friday is considered the most auspicious day of the week to perform Chudakarana or Mundan Sanskar. The other auspicious days are Monday, Wednesday, and Thursday.

Looking for the Mundan muhurat in 2023? We have listed all the Shubh muhurat for Mundan in 2023 from January to December. Check out the Mundan ceremony dates 2023 and select the best day to perform the Mundan Ceremony of your child.

Mundan Shubh Muhurat in May 2023

There is no auspicious Muhurat in July 2023 for the Mundan ceremony. However, you can perform the Mundan of your child on the Sarvasiddhi Muhurat of this month after the astrology consultation.

There is no auspicious Muhurat in August 2023 for the Mundan ceremony. However, you can perform the Mundan of your child on the Sarvasiddhi Muhurat of this month after the astrology consultation.

As per Hindu Panchang, apart from Sarvasiddha Muhurats, there are no auspicious dates for the Mundan ceremony in September 2023. Consulting an astrologer on chat or call is advisable.

Besides Sarvartha Siddhi Muhurat such as Dussehra and Diwali, there are no auspicious dates in October 2023. You may do Mundan on Abhuj Muhurat dates or get an astrology consultation for the same.

Although there is no Shubh Muhurat for Mundan ceremony in November, you may choose to perform this function on Devuthani Ekadashi, one of the Sarvasiddha or Abhuj Muhurat. For more information, you may consult an expert astrologer on our site.

Shubh Muhurat Date and Time for Mundan in December 2023

December 2023 has no good dates for the Mundan ceremony. However, you may ask an astrologer about the best date for Mundan even in this month.