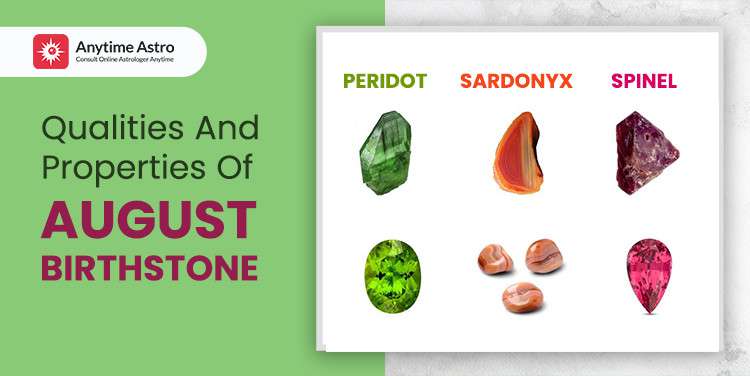 Are you an August-born? Have you ever wondered what’s the birthstone for August?

“You know the World is a magical place when mother Earth grows her own jewelry.” Gemstones are probably the most beautiful natural entities on Earth. Their shine and allure are not hidden from anyone but there is more to them than what meets the eye. Birthstones or Gemstones when worn right can change the course of the wearer’s life. They can bless you with special powers to connect with your inner conscious. August, the seventh month is a parent to many confident and organized individuals. They make a great leader but most of them have a stubborn side. To balance these traits, Astrologers recommended wearing August crystal Birthstone for individuals born with the August zodiac sign.

Now, you must be curious to know what is the birthstone for August? I will not elevate your curiosity any further. Let me quickly tell you the August Birthstone name, August stone color, and then we will discuss the August birthstone meaning.

What Is The Birthstone For August?

As per astrology, there are two ways to determine birthstones- the old age “traditional method” as well as the brand new “modern method”. There is a misconception that all months have a single favorable Birthstone that brings luck, joy, and happiness in their life. Sardonyx, the most traditional Birthstone for the month of August is what some people think is the only stone for August born. In reality, August responds to multiple month gems as per the traditional and modern methods. For the month of August,

What is the Popular Birthstone for August?

Sardonyx, Peridot, and Spinel are the three lucky crystals for August month. Although all three of them are beneficial for August babies, we consider the modern method more appropriate for determining the August Birthstone name. Moreover, between Peridot and Spinel, Peridot is more popular as well as a more beneficial stone for August born.

That is why for the rest of the blog, I will stick to the Peridot as August birth gem. Let us move ahead and see what is the August birthstone meaning, its origin, and its history.

Meaning, Origin, and History of Birthstone For August- All About Peridot

Meaning and History of August Gemstone

Some people believe that the Birthstone for August ie. Peridot has got its name from the Arabic word” Faridat” which means gem. While others stick to the Greek word “Peridona” translating bestow wealth. What matters is, the Peridot is one of the most beautiful stones on Earth and it has been in the jewelry industry since the ancient Egyptian period. Egyptians named it the “Gem of the Sun” because of its glistening structure. Moreover, ancient Romans considered Peridot as a tool to repel fear, enchantment, and melancholy. The largest Peridot present in the world is believed to be 310 carats. It belongs to Smithsonian.

You know the history of August crystal Birthstone, now let us see its source of origin.

Arizona, a small and hot town in San Carlos Apache Indian Reservation is home to most of the green crystals present in the world. The other places where one can find Peridot easily are Africa, Pakistan, Myanmar, United States, and China.

By now, you know what’s the birthstone for August. Now, let us see what is the August birthstone color.

What Color Is The Birthstone For August?- Color Of Peridot

Traditionally, Lime green is the August birthstone color. The green color symbolizes the rejuvenation of life and nature. Peridot is one of the rare gemstones which comes in a single color. It comes only in shades of green like lime, yellowish-green, olive green, and medium to dark green. The Peridot which has a sparkling lime green color and does not have a brown or olive cast is considered the best Peridot stone.

How Will Birthstone For August Benefit You?- Benefits Of Peridot

The birthstones work as a lucky charm and are known to enhance the positive traits and mitigate the negative traits of an individual. The Peridot which has a green August Birthstone color can benefit the wearer in incredible ways. Read on to know some of the most popular benefits of wearing August stone.

Peridot is truly a magical stone. On the mental level, legends believe that it can cure depression. On the physical level, August gemstone helps the heart and lungs to function well by eliminating toxins present in the body. Peridot is known to benefit the wearer in multiple ways. It is also believed that it can cure digestive problems as well as is very beneficial for nails, skin, and hair of the wearer.

As August stone color is indicative of compassion, ancient people believed that Peridot can bring harmony and prosperity to the wearer’s life. It deals with negative feelings like jealousy and anger and introduces happiness in the relationships.

Effect of Peridot in day to day life

Ancient folklores indicate that those who wear Peridot stay safe from nightmares. It introduces happiness and peace in the life of August-born. Moreover, it can dispel the feeling of laziness and exhaustion and introduces new strength and energy in the body of the wearer. It can deal with anger and stress issues to make the wearer’s life peaceful. Astrologers also believe that it can help you in having a good night’s sleep and make you more confident and patient.

Interesting Facts About The Birthstone For August, Peridot

Care and Cleaning of Peridot, The Birthstone For August

The hardness of Peridot is 6.5 to 7 according to the Mohs scale which makes it medium-hard. That is why August gemstone needs proper care and should be used with caution. They need constant cleaning.

The best way to clean Peridot is by using warm water with a soft detergent and a soft-bristle brush.

Final Thoughts on Birthstone For August

Peridot, the lucky Birthstone for August is a symbol of compassion and peace. It can bring prosperity and strength to the wearer’s life. However, before wearing Peridot or any other crystals of August, you must consult an expert Astrologer. At Anytime Astro, you can Talk To An Online Astrologer and find your lucky August gems. They can also help you to find the strengths you were born with, challenges you might face, and your future prospects. Chat with a Psychic now!