Open
Home Gemstones What Are Birthstones - List By Names, Colors And Meanings

What Are Birthstones - List By Names, Colors And Meanings 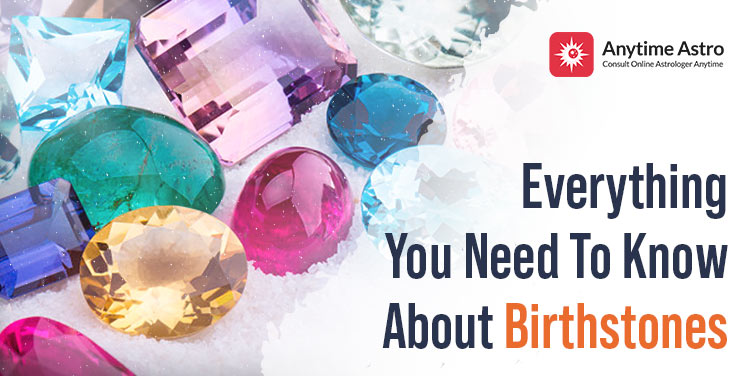 What Are Birthstones - List By Names, Colors And Meanings

If ‘what are birthstones?’ is the question that keeps on lingering on your mind, then you are at the right place. In this blog, I will tell you everything that you need to know about birthstones.

The first evidence of birthstones was found in Biblical times. It was associated with the twelve gemstones studded in Aron’s breastplate. These were initially identified to represent the twelve tribes of Israel.

The following gemstones adorned the breastplate of Aron:

Eventually, these gems got associated with the twelve zodiac signs and later to twelve months of the year. These constituted the first known list of traditional birthstones.

Fast forward to today, birthstone gems’ concept is so popularized that now almost each one of us knows our respective birthstones. Here, you must also know that during all these years, some gems were removed, and some others were added to the list.

The question here is, although we know the gemstones that are our birthstones, do we really know the meaning of each one of them? And how these can benefit us to lead a more fulfilling life.

Well, you will get the answers to these questions and many more in this blog.

What Are Birthstone Gems?

The first thing that is essential for you to know is what exactly is a birthstone.

Birthstones also known as birth gems, are specific gemstones that are associated with each month. All birthstones vibrate on a specific frequency that resonates with the people born in their respective birth months. They also work as the conduit of positive universal energies thus creating a connection between the Earth and the higher realm. When worn for a long time, these energies can benefit you in amazing ways.

In fact, it is also recommended by Astrology experts to wear your birthstone to let the divine energies guide you in various aspects of life. And this is also the reason they are referred to as astrology birthstones sometimes.

In ancient times these birth gems were kept in the close proximity of a person to save them from evil energies or to favor them in the difficult phases of life. But now, these birthstones are used to create jewelry and fashion items that people wear and flaunt. This has given rise to birthstone beads and other fancy and artistic items. This is the reason why ‘my birthstone color’ is more of a concern than ‘my birthstone benefits.’

Now, knowing enough about the basics of birthstones, let’s see which gemstones have actually made it to the list of all birthstones. And also, see the ones that have been removed or replaced from the list in due course of time.

Here is the list for you to identify your traditional, new, and alternate birthstones.

Now since you know the birthstone names, let's see the other aspects. It will include the best birthstone colors and their meanings.

Note that here, we’ll discuss the modern or new birthstones that are widely accepted today.

The beautiful red gemstone, Garnet, is January’s birthstone, known as the ultimate protector. The basic meaning of ‘garnet’ is seed because it has the appearance of a pomegranate seed. The January birthstone has always been known to protect the wearer during traveling. In modern times it is used to create jewelry.

Amethyst is a gorgeous purple-colored gemstone that is the ultimate source of wisdom for its bearer. Amethyst is derived from the Greek word ‘Amethystos’ meaning sober. This gemstone guarded the wearer against intoxication. It is also the gemstone known to strengthen the bond between lovers and give them the courage to survive any situation in life.

Aquamarine is the blue or cyan member of the beryl mineral family. It is the original birthstone of March, known for its serenity. This attribute is mainly associated with the sea. It is believed that keeping it near will protect the bearer from the dangers arising during sea travel.

Diamond, the hardest gemstone of all, is known for the strength it gives to its wearer. Diamond got its name from the Greek word ‘Adamas’ that means unbreakable and unbeatable. It is amongst some of the many desirable and most expensive birthstone gems. And the best thing is that it is the only one for April with no alternate birthstones.

Emerald is the beautiful green-colored gemstone that signifies hope in one’s life. It is primarily associated with fertility. It is also the gemstone that is known to be one of Cleopatra’s favorite gems. It is the gemstone of goddess Venus and helps May babies get their love life in line.

Although Alexandrite is a transparent birth gem, it shows a variety of colors when exposed to light. This justifies the ultimate meaning associated with it, love. It is because, metaphorically speaking, even love shows its true colors when subjected to different life situations.

Birthstone colors play a significant role in their likability, and the attractive pinkish-red color of Ruby proves it. It is the birth gem that is symbolic of vitality because of its resemblance to the color of blood. At some point in time, Ruby was considered the king of gems.

The irresistible and soothing olive green color of Peridot makes it one of the most desirable birthstone gems. This is the birth gemstone that is the epitome of endless beauty. It is believed to protect its wearer from nightmares and helps in establishing a balance between emotions and intellect.

Sapphire is the most valuable birthstone appreciated for its deep blue color and is known for its purity. Sapphire birthstone beads and other jewelry items are worn to attract success in one's life. This gemstone got its name from the Latin word ‘Sapphirus’ literally meaning blue stone.

Tourmaline is the natural birthstone that wins every heart with its beautiful appearance. It is a brilliant gemstone used for healing purposes. Mainly associated with October, it is used by people born in other months as well. This makes it a preferred name in astrology stones and gems.

Of all birthstones, Citrine is the one that shows the hues of the amber sky. Citrine, the gemstone of joy, is loved by jewelry wearers, gemstone collectors, and gemologists for various reasons. If you are feeling lost, then this gem can be used to ward off evil thoughts.

Blue zircon is not the most expensive birthstone, but it is definitely one of the most beautiful one. This gemstone is used to bring movement in stagnant energies. It heals the inner self and brings the lost self-confidence back. These attributes make it popular among different birthstones.

That is all about the different birthstone gems. These can be used by anyone to gain the advantage of their energies. Even for those of you who don't believe in the metaphysical properties of these original and natural birthstones, they can still be worn as ornaments.

Also See: Which Day is Good to Buy Gold

The Most Expensive And Valuable Birthstone

Diamond (Clear), Garnet (Red), Emerald (Green), Sapphire (Blue), and Ruby (Pinkish-red) are the ones that fall in the category of precious gemstones. This makes them big-budget gems. Along with that, their magical properties are commendable. This is why they are also some of the most preferred astrology birthstones and gems.

Birthstones can be extremely beneficial for the wearer in various aspects of life, but it is always advised to consult an expert before wearing them as these gems can also have an adverse impact based on the position of your planets and other celestial bodies.

Want to know the luckiest birthstone for you as per your birth chart? Get expert advice from our psychics and wear your birthstone today.