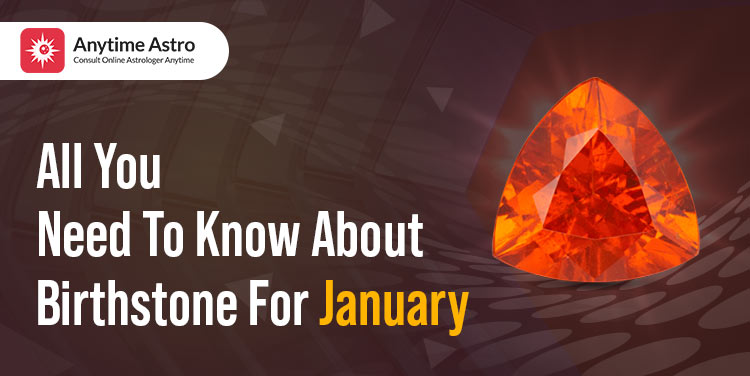 Were you born in January month? Want to know all about the Birthstone for January?

Your birthday not only indicates your age but it can also say a lot about your personality. January, the first month according to the Gregorian calendar is an abode to two zodiac signs. Both Capricorn and Aquarius are January zodiac signs as they rule the January-born individuals. As per Vedic astrologers, the Birth month is considered an important criterion to predict traits of individuals, their nature, their future possibilities, and Birthstones. How could we forget the Birthstones? Your birth month can also determine which Birthstone for January born will bring prosperity and harmony to their life. Needless to say, your Birthstone can affect your destiny as well as your life journey.

Whether you are a jewelry enthusiast or a firm believer in astrology, I know one thing is going on in your mind.

What is my Birthstone (January gem)? Read more and you will know.

Which Is The Birthstone For January?

When it comes to Birthstones, one imagines a piece of beautiful glistening crystal. The January birth crystal is no different.

Now let us see the meaning of the Garnet Birthstone.

Also See: Best Day to Buy Gold in This Month

January Birthstone Meaning And History- All About Garnet

The word “Garnet” was first used by philosopher, Albertus Magnus. This word is derived from the Latin word “Granatus” which means pomegranate seeds. This is because the clusters of Garnet look like seeds of the pomegranate.

The Garnet Birthstone is a rich, strong, sparkling, and intense Gemstone. The use of Garnet goes back to the Bronze Age where medieval people used them as jewelry and abrasives.

Talking about its formation, Garnet is a cluster of multiple minerals. One can find Garnet in six types:- Andranite, Ugrandite, Rhodolite, Spessartite, Almandite and Pyrope. The crystallography of the Birthstone of January is Isometric, Rhombic, and Dodecahedron. Wondering what is the color of the January Birthstone?

Properties of The January Stone

Out of all Birthstones by month, Garnets are considered as most special. Because of its beauty and durability, Garnet is already well known in the world. One can get Garnet in multiple colors and sizes. We know all about its beauty and delicacy but do you know Garnet has multiple health benefits too?

It is believed that Garnet can channel the positive vibes of the wearer and free them from any negative aura. It is known to bring peace of mind by eliminating negative feelings like guilt and depression.

Ancient people also tied Garnet to a cure for hemorrhages and inflammatory diseases. They believed that Garnet can even handle anger issues in an individual. Some traditional folklore claims that Garnet can aid in producing hemoglobin and improve the circulatory system. Now, let us know more about its significance in day-to-day life.

Significance of Garnet in Day to Day Life

Purity, Truth, Friendship, and Loyalty are the four main things Garnets symbolize. January zodiac Birthstone, Garnet traditionally symbolizes faith, protection, awareness, loyalty, and renewal. It works as a negativity mitigator. Some people believe that Garnet can also elevate the sensuality and sexuality of individuals. Earlier, people believed that Garnet can warn as well as protect people from upcoming dangers. After wearing this stone, you can see a great deal of change in your confidence, energy, and willpower.

Hardness and Availability of Birthstone for January

The hardness of Garnet is 6.5 to 7.5 which makes it medium-hard. You can find January stone in any part of the world. However, Bohemia and the African continent are their biggest producers.

Care and Cleansing of Garnet

Garnet is not much hard, which means it can be easily damaged. It is advised to put the January zodiac Birthstone separately in a jewelry box. In that way, it will not scratch with other gems and will not get damaged. Garnet can be cleaned by using warm water, a brush with soft bristles, and some light detergent soap. If you are using a non-fracture-filled stone, use ultrasonic cleaner. For cleaning fracture-filled, you should consult your jeweler.

So this is all about Garnet, the Birthstone for January. Some of you must have a query about what are the two Birthstones for January?

And, because Garnet is common in both of these methods. We have given a detailed explanation about Garnet only.

Final Thoughts On Birthstone For January

Garnet, the lucky Birthstone for January is a symbol of faith. It can bring love and prosperity to the lives of January born. It is also known for increasing the energy, willpower, and confidence of natives. However, before wearing this Gemstone, you must consult a trusted astrologer. At Anytime Astro, you can Chat with An Online Astrologer and find your lucky January gems. They can also help you to find the strengths you were born with, challenges you might face, and your future prospects. Chat with a Psychic now!