How Compatible Are Aries Woman And Scorpio Man? 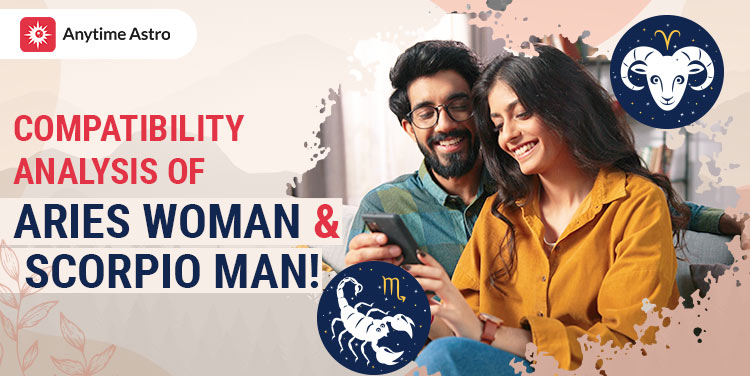 Know How Well You Bond With Your Partner!

How Compatible Are Aries Woman And Scorpio Man?

An Aries woman is very strong, outspoken, and fierce, whereas a Scorpio man is intense, reliable, and has a very attractive personality. The Aries woman and Scorpio man compatibility can be strong because they have a lot in common.

Let’s explore what happens when the fiery Aries gets into a relationship with a water element ruled- Scorpio woman.

We have analyzed the Aries woman and Scorpio man's degree of compatibility by highlighting some criteria. Have a glance!

The male Scorpio is ruled by the planet Pluto which bestows these natives with loyalty, honesty, and devotion. Female Aries are attracted to the witty and intellectual side of their Scorpio man. Whereas Aries woman is ruled by Mars, the God of War which makes their natives enthusiastic, aggressive, and desirous.

The Scorpio man admires his female Aries’ devotion and honesty. He also likes the fact that she is not much of a feminine nature. This makes him confident about sharing his concealed or unrevealed secrets with his Aries soulmate.

Apart from this, both of them are workaholics and take their responsibilities seriously. They both have good communication skills which allow them to solve any problem as a team. However, Aries' woman needs to make sure that her partner doesn’t abandon her because he waits for no one when it comes to completing any task. However, their work compatibility and they are likely to make a lot of money together.

Scorpio Man in love is fiercely protective of their loved ones and of themself as well. They are always aware of what their partner needs. Males Scorpio is quite possessive and obscured in relationships. Being an overthinker, they do not forgive and forget if they have been hurt by their better half.

On the other hand, female Aries in love tend to be supportive and loyal. They are ready to swim in the oceans to make their soulmate feel special and happy. She constantly finds ways to express her feelings to the person she loves. Aries women are capable of attracting their men with their confident and optimistic character. They will also be their partner’s savior during the hardships.

Once they enter into a relationship or fall in love, the Aries woman and the Scorpio man are deeply and intensely involved. A strong bond tends to develop between them. Love makes them perfect partners and romantic lovers. Loyalty, honesty, and outspokenness are some of their best qualities in a relationship.

They are emotionally and physically a perfect fit for each other. This makes the Aries woman and Scorpio man compatibility high. 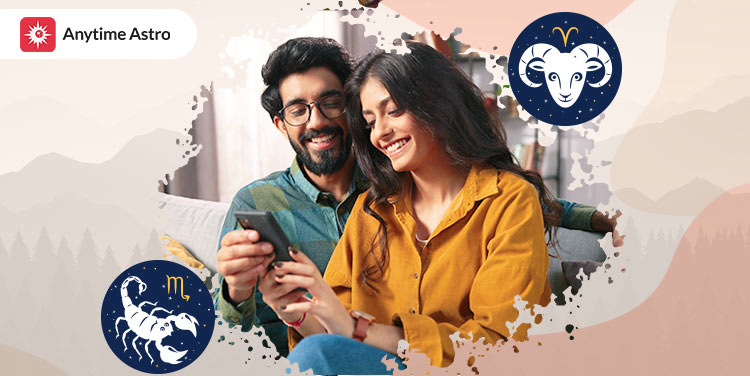 The female Aries and male Scorpio have blooming compatibility in the important areas of life which enables them to build a good level of understanding. They both appreciate each other's efforts. Apart from it, the Aries's friendship compatibility is also significantly strengthened with the Scorpios due to their mutual interests in many things.

Scorpio men tend to ask deep questions with insightful opinions, which Aries women find repulsive. Despite his harsh opinions, she still listens to him patiently. There are chances that these opinions might trigger an argument between them but there is also a possibility that the bonding between them strengthens. If this couple is not able to deal well in the relationship then they can also consult an expert love astrologer.

If this duo is able to establish a smooth connection between them, then the male Scorpio will be ready to deal with the negative reactions of his lady.

Aries woman and Scorpio man have good compatibility and understanding in their physical relationship. The male Scorpio tries his best to make his partner comfortable and takes proper care of his partner’s needs. On the other hand, Aries' woman is ready to be submissive and spontaneous which lets them develop a strong intimate relationship.

The chemistry between an Aries woman and a Scorpio man is intense. It is apparent that they form a close bond and care for one another all the time. It's a very long-lasting, forward-moving relationship between them, and they are extremely committed to each other.

Though there is so much positivity in their relationship, this couple is not free from flaws. The possessive nature of Scorpio man can be irritating to their partner. He needs to learn to trust his Aries partner while female Aries should also make sure to stay loyal and honest with him.

Overall, in order to have a good Scorpio woman and Aries man compatibility or Scorpio man and Aries woman compatibility, this couple will have to bring patience and tolerance between them. Rather than feeling insecure, they should open up about their thoughts with each other. Communication is the key to their relationship.

If you are one of the Aries-Scorpio couples and unable to deal with some hardships in your relationship then you can always talk to an astrologer on phone to get better guidance.