How Compatible are Aries Man and Scorpio Woman? 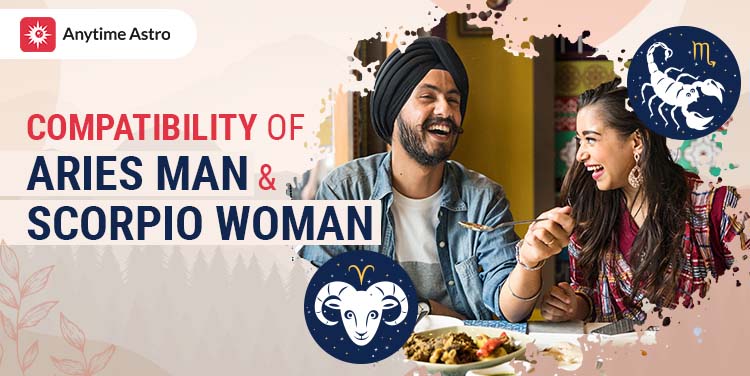 Know The Compatibility Between Aries Man And Scorpio Woman

How Compatible are Aries Man and Scorpio Woman?

Aries man and Scorpio woman are likely to get along well in a relationship. These two signs interact effectively, as each brings to the table a certain amount of warmth and coolness to maintain the balance, but an excess of either can negatively affect the bond.

The Aries man and Scorpio woman compatibility can be high on various fronts of life. They are believed to be an intellectual couple who try to uplift each other. When it comes to making their relationship work, Scorpio leaves no stone unturned.

Do you want to know more about what happens when the fiery Aries gets into a relationship with the watery female Scorpio? Well, this blog got you covered. Keep reading!

We have tried to analyze the Aries man and Scorpio woman compatibility on various criteria. Have a look!

Aries man has strong instincts to push away things that can be a red alert. He is poised and expects his partner to love him for the way he is. Aries being an assertive first sign in the Zodiac wheel is a born leader who strives to achieve everything.

On the other hand, a female Scorpio is also passionate, intense, and ferocious. Being ruled by the element of water, they are calm and aggressive at the same time. Their placidity is something that can keep the heated argument between the two at bay. Above all, a female Scorpio is believed to make wise decisions and this thing looks appealing to their Aries soulmate.

A male Aries is drawn to the charismatic and charming persona of their Scorpio woman. While she loves the straightforwardness of Aries man. Their affection for each other can easily be noticed by others. This couple is moreover the people’s magnet as everyone enjoys being in their company.

It takes a lot of time for an Aries man to think of getting married to a female Scorpio. However, if they have been dating for a long time then they are likely to establish a strong bond as they might have seen a lot of ups and downs during their journey.

This couple is good at communicating with each other and easily expresses what they feel. Their healthy conversations let them forgive each other real quick. This magnificent couple is capable of bringing out the best in each other. 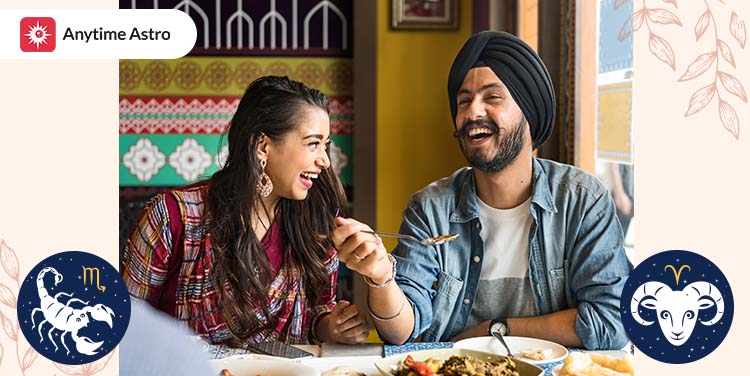 It is difficult to make a balance between fire and water but many times the water is all you need to extinguish the fire. Similar is the case of Aries man and Scorpio woman.

Ruled by the element water, the female Scorpio is capable of calming the fiery Aries, the majority of the time. This itself speaks of their good level of understanding.

However, there are times when the female Scorpio can get ferocious too. And during such times, it is the responsibility of male Aries to make her feel relaxed and comfortable. As the relationship is a two-way thing, either of the two should learn to stay cool during chaotic situations.

Apart from it, their good level of communication can eliminate the majority of their fights because this is the key to a successful relationship. To strengthen their bond this couple should also learn to overcome their differences.

Aries Man and Scorpio Woman: The Positives and Negatives

There is a mutual attraction between Aries man and Scorpio Woman. The masculine and bold personality of Aries man looks magnetic to their Scorpio soulmate. They share the desirable emotional bond with one another.

They both are passionate souls who try to bring out the best in each other. And this is the reason why they will always encourage one another to grow in their careers and other facets of life. The strong and profound chemistry between the two can make anyone believe that Aries man and Scorpio woman compatibility is potentially high and they are likely to last till eternity. However, this can also make you wonder about the Aries most compatible sign.

On the flip side, their relationship is not flawless as the two of them can get impulsive and aggressive. If both of them get highly temperamental at the same time, they might end up getting into a heated argument.

Their relationship depends on who dominates when they make love. The Aries man likes to have an upper hand in the relationship. Although the Scorpio woman is also controlling, she lets her man take the lead because all she wants is her partner's affection and care.

If the couple faces any difficulty in overcoming the hardships they should seek an online astro for their relationship’s betterment.

Final Thoughts on The Compatibility of Aries Man and Scorpio Woman…

While Aries man and Scorpio woman will require some effort and time to get along well, they will surely understand each other’s desires and needs, as time passes by.

Male Aries is usually naive and innocent and stumbles at making rational decisions. This is where his wise Scorpio partner can help him in analyzing a situation in a better way. This is one of the reasons why Aries man is likely to idealize his partner.

On the other hand, the female Scorpio is attracted by the bold and courageous personality of her partner. As Aries man always encourages her to do better in different avenues of life. And this is how these two complement each other.

The moment this couple decides to tie the knot for a lifetime, there is nothing that can break their mutual trust.

All in all, the Aries man and Scorpio woman compatibility can be really great as they both have a knack for making each other calm during frenzied situations.

If you are one of the Aries man and Scorpio woman couple and want to know how compatible you two are then you can always talk to an astrologer on the phone. They can help you in getting clarity in your relationship.