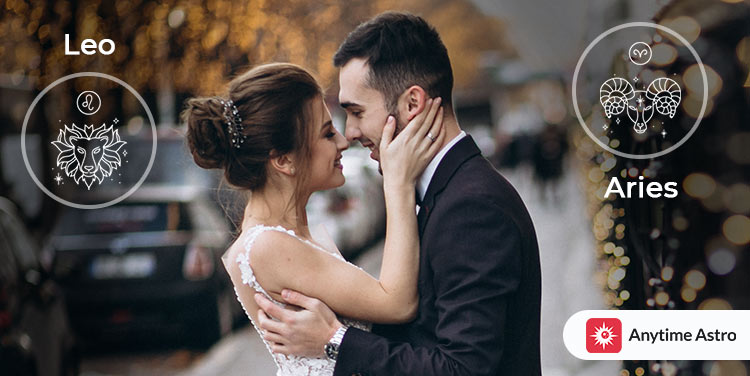 What Are Your Chances To Find Love?

To understand the compatibility of Aries and Leo, we should first have an idea of how are they as a man and a woman.

Aries as a Man

An Aries man is bold, domineering and attractive. He is confident in his conduct and has great energy to perform any task. With his strong will power, he can attract anyone. His valor and enthusiasm to live each moment makes him stand out from the other zodiacs. Although an Aries man doesn’t like to be bound, he tends to go beyond any limit for the ones he loves. Represented by the Ram, the Aries male is not great at compromising or acknowledging his defeat. He believes he knows the best and thus becomes aggressive when not heard or given attention. As pe Aries zodiac sign compatibility, the main downsides of an Aries man personality is his arrogance, coldness and short temperedness.

Like a Lioness, a Leo woman is fearless, loyal and stunning. She knows she can handle everything and this is her greatest strength. She is confident about her actions and lives her life on her own terms. She makes decisions from her heart but that are mostly calculative and in favor of everyone. Although a Leo woman is kind and generous, she loves creating drama around. She needs constant attention and doesn't like taking orders from anyone else. Being an alpha female, there is nothing a Leo woman cannot do. She pursues her ambitions, manages the budget, socializes with friends and does everything that makes her and her loved ones happy and satisfied.

So, this was a quick insight about an Aries man and a Leo woman personality. Read further to unravel the Aries man and Leo women compatibility in friendship, marriage, love, and relationship.

Is Aries Man and Leo Woman a Good Match? 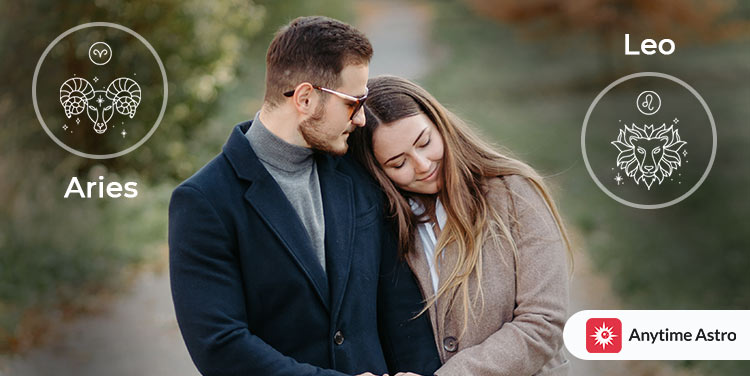 Ready to decode the Aries man-Leo woman relationship. Read on and discover the interesting insights about Aries men and Leo women compatibility as per online astrologers.

Aries Man and Leo Woman: When Dating or in Love

When an Aries male and Leo female meet each other for the first time, they get attracted by each other’s charm and personality. The Aries men feel drawn towards the magnetism of Leo women while the Leo women like the energy and enthusiasm of Aries men. Also, a Leo woman loves the romantic surprises by the Aries man. She spends most of the time with Aries man exploring new adventures and experiences. Likewise, an Aries man feels comfortable with his Leo match. He likes the way a Leo woman adores him and fulfills all his physical and emotional desires.

The Aries man and Leo woman compatibility in bed is tremendously good. They have an instinctive understanding of each other’s needs and desires. They put efforts to strengthen Aries man- Leo woman compatibility sexually and look for reasons to charm one another. Love experts tell that both Leo and Aries exhibit similar sexual preferences and thus share a warm and passionate connection in bed. They start with appreciating each other and go forward with strong romantic gestures. During love making, they often try to take a lead in bed. This at times makes them struggle and fight causing some minor conflicts.

An Aries Man and Leo Woman Compatibility in Marriage

An Aries man and Leo woman relationship in marriage is unique and strong. They love spending time with each other and have many interests in common. As a partner, an Aries man stays generous to his partner, Leo woman. He allows her to take the lead and make her feel calm, composed and comfortable. On the flip side, the Leo woman keeps a high demanding approach in their marriage. She doesn’t overlook the rude behavior of an Aries man unlike the other zodiac signs. When it comes to raising the children, the Aries man and Leo woman show up as strict and unbiased. They want their children to live up to their standards by keeping high expectations.

Challenges in An Aries Man and Leo Woman Relationship

The most challenging thing in an Aries man- Leo woman relationship is their dominating attitude. They both find it hard to obey rules and thus have frequent clashes with each other. The constant power clashes are also the reasons for disharmony between this powerful couple. Moreover, the demanding nature of Leo women also tend to create problems in the relationship. Be it Leo man and Aries woman compatibility or the vice versa, the nature to not submit and compromise makes things frangible. Love experts suggest that both these signs should subside their egos and try to be more patient when it comes to dealing with their relationship problems.

Undoubtedly, an Aries man and Leo woman are a couple made for each other. They are highly likely to be together if they could balance out each other’s negative aspects. The male Aries needs to make sure that he appreciates and gives the needed attention to his Leo best match while the Leo woman should learn to compromise and understand the expectations of an Aries man as well. Overall, the level on which an Aries man and Leo woman relationship compatibility lies is inexplicably the strongest. They can learn a lot from each other and make their relationship more happy and blissful with their efforts.

How is your Zodiac Sign Compatibility with your partner? Talk to an astrologer online and reveal the strengths and weaknesses of your relationship. Also, find the possible challenges and opportunities that may turn your relationship blissful. You may also get solutions for your problems and find a sure way to make your relationship successful.