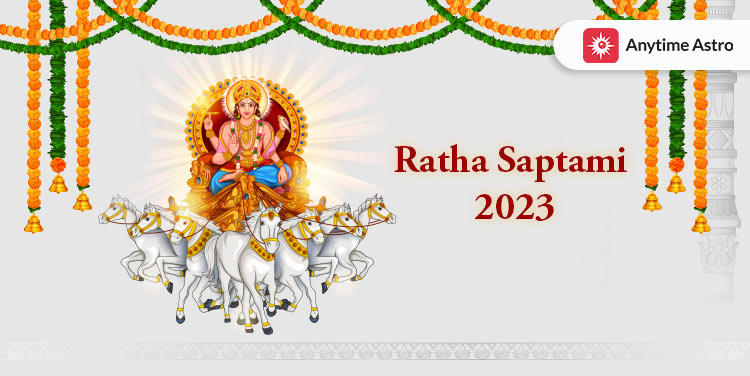 Ratha Saptami, also known as Saptami Tithi or Magha Saptami, or Achala Saptami, falls in the month of Magha and is devoted to Lord Surya. On this day, Lord Vishnu is worshiped in the form of Surya Dev, also known as Suryanarayan. Ratha means the Chariot, and Saptami means the 7th day, and Ratha Saptami is named so as it falls on the seventh day of the Shukla Paksha.

On Ratha Saptami 2023, worshiping Lord Surya bestows us with numerous benefits, such as it gives us wisdom, wealth, name, fame, power, energy, good health, heals diseases, protection from negative energies, and much more. The Rathasapthami puja is performed with complete devotion by devotees across the country.

This year, the Ratha Saptami 2023 date is as mentioned below:

The significance of Ratha Saptami is that it is related to the birth anniversary of Lord Surya. Another Ratha Saptami significance is that the Ratha of Lord Surya travels in the North East direction by turning into the North Hemisphere. This also indicates the change of Season. Even in the Puranas, Surya Dev is shown riding a chariot drawn by seven competent horses, with Aruna as the Charioteer. This festival is also auspicious as it commemorates the beginning of the harvest season, and the farmers worship the Sun to reap crops in plenty.

Surya Dev was born to Rishi Kashyap and his wife, Aditi, on the day of Rathasapthami. Rishi Kashyap, on his son's birth, offered gratitude to Lord Vishnu when the latter told him the newborn was the incarnation of Surya Dev. Lord Vishnu further informed that Rishi Kashyap's son belonged to everyone, and his light shall shine on all living as well as non-living objects. Moreover, the Sun would transit from one sign to another in all the 12 signs and complete an earth year.

A King named Yashovarma of the Kamboj Empire did not have a son to inherit his throne. After performing a lot of yagnas and worshiping, the King was blessed with a son. However, the child was born with a terminal illness, and the King & Queen, disheartened, did not know what to do. A sage, during that course of time, visited the King's palace. After learning about the King's son, the sage asked the King to ask his son to perform the Rathasapthami puja and request Surya dev to heal his disease. On the following Rathasapthami, the son chanted the Ratha Saptami Mantra and performed the Rathasapthami puja as asked by the sage. Miraculously, he was healed and grew up to be a great ruler and a good King.

Durvasa Muni, the sage known for his anger and curse, once visited Lord Krishna. Durvasa Muni was performing strict penance then. Lord Krishna's son, Shambh, was very strong and had a fit body. Shambh mocked at the weak body of the Muni, angered at which he cursed him to develop leprosy. Lord Krishna, looking at his son's not-getting-better condition, asked him to worship Surya Dev. Shambh started chanting Ratha Saptami Mantra, performed the puja with immense devotion, and observed fast. Pleased by his devotion, Surya Dev healed him of leprosy and made him fit again.

The devotees who perform the Rathasapthami pooja with complete devotion are blessed with the following benefits:

It benefits the mental, physical and emotional health of an individual.

Favorable for couples who wish to have a son.

Provides the devotees with a dynamic personality by giving them confidence, power, and energy.

Dissolving the sins of this life and the past, performing this puja liberates the soul from the cycle of life and death.