Devotees can bathe anytime during the month of special baths, starting from the Posh Purnima to Magha Purnima. If the devotees are willing to perform the Triveni Sangam bath, the last day is Magha Purnima which follows the conducting of the Kalpavas in the holy place of Tirthraj Prayag. The Sanatan Dharma believes that anyone taking a special bath during the Magha month is blessed with happiness, fortune, children and salvation by Lord Madhav, or say, Shri Krishna.

The Magha Purnima vrat can be observed on:

Bathing in the holy waters of the Maghi Purnima Eve is considered too auspicious as per the scriptures. Moreover, it is also said that donating to the needy, after bathing, washes away the sins of the present as well as a past life.

Devotees also seek blessings from Lord Vishnu and Lord Hanuman on the day of Purnima, and it is believed that the wishes of those who worship these Gods get fulfilled.

Further, it is considered that Gods and Goddesses come from heaven to spend some time on earth during this month and stay on the banks of the holy river, Ganga. Hundreds and thousands of devotees from across the country visit the Magh Mela and Kumbha Mela organized during this month near the Ganges. Not only these, Magh Purnima, as per the mythology, is said to be a holy day for performing various spiritual and religious events.

Magha Purnima Significance as per Astrology

On Magha Purnima, Sun enters Capricorn and Moon moves into the Cancer Zodiac Sign. Therefore, as per mythology, any difficulties related to Sun and Moon can be resolved if taking a dip in the holy waters, as per the Magha Purnima Puja Vidhi. You can also speak to the astrologers to find out what impact it makes when the Sun and the Moon transit in Capricorn and Cancer.

As per Science, the significance of Magha Purnima is immense as it helps the human body adjust to the change of seasons. Thus, strength and power are what the holy bath renders an individual. If, as per the Hindu Calendar, Pushya Nakshatra falls on the same day as Magha Purnima, the day becomes even more auspicious. A float festival is also organized in Tamilnadu on the Maghi Purnima. 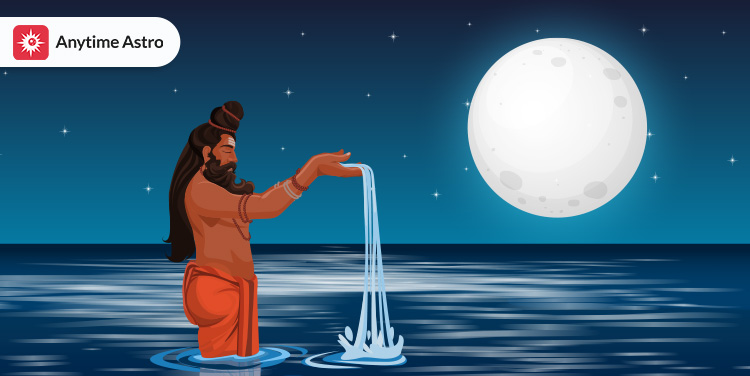 Once lived a Brahmin named Dhaneshwar in Kantika Nagar, who used to seek dakshinas and donations for his livelihood. Though they were poor, the Brahmin and his wife lived happily in their abode. However, the only thing that bothered them was that they didn't have kids. Moreover, one day when she went to the city to get donations, she was denied as she did not have children. This broke her, and she became sad.

Finally, Brahmin's wife got pregnant after performing the puja of the raw mango fruit that her husband brought. As instructed by Goddess Kaali, on every full moon, his wife performed the puja vidhi and kept adding the lamp. A son was born to the couple, whom they named Devdas.

Devdas was sent to Kashi, his maternal uncle's house, for studies when he grew up. In Kashi, the accident of his mother and nephew ended up making him almost tie the knot by fraud.

As Devdas was too young to get married, he tried and requested to stop the marriage but was still forced into it. On the same day, Yamraj, in the form of kaal, came to take the life of Devdas, however, as his parents had observed fast on the occasion of Purnima, he was saved. It is due to this Magha Purnima vrat katha that fasting on this full moon is said to be auspicious, and believed that it fulfills all the wishes and gives freedom from all the troubles.

The procedure of Magha Purnima Vrat Vidhi is as follows:

As mentioned above, the meaning of Maghi Purnima holds much significance as per the mythology, anyone wishing to seek blessings of God should observe fast on the Magha Purnima 2023.