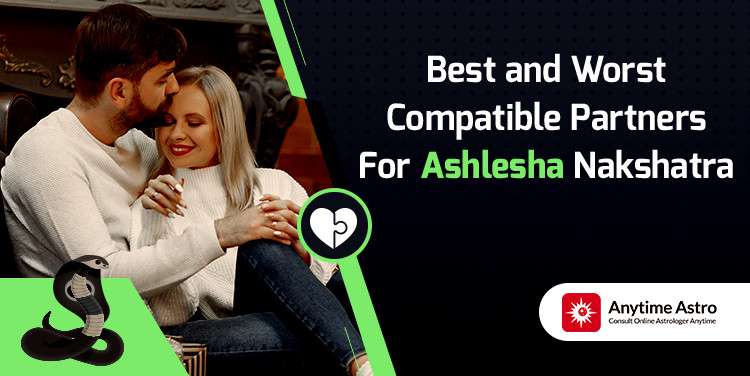 Ashlesha, also referred to as Clinging star or Naga Nakshatra, is the ninth Nakshatra in the series of lunar constellations. It extends from 16°40' to 30° degrees in the Cancer zodiac sign. Symbolized by “a coiled serpent”, Ashlesha Nakshatra relates to everything associated with the snake. The presiding deity for Aslesha is the Sarpas, the group of snakes. Ashlesha Nakshatra is ruled by the planet Mercury, the planet of intellect and communication.

Ashlesha Nakshatra is associated with wisdom, cunningness, the primordial energy and concentration abilities. It signifies the secretive, insecure and confused emotional nature of natives. As per Vedic astrology, Ashlesha Nakshatra natives like intimate connections. They stay away from unfamiliar situations and cling to surroundings, namely close friends, relatives and family members. These natives entwine their family members by offering gifts and comforts. Ashlesha compatible stars experience dual feelings with these natives. Sometimes, they feel constricted while the other times they feel emotional bondage, comfort and love. Since Ashlesha natives exhibit great emotional attachments, they are very protective of their kith and kin.

Read on to learn about the best and worst Ashlesha Nakshatra matching stars for marriage.

Compatibility of Ashlesha Nakshatra with Other Nakshatras

Most Compatible Nakshatras for Ashlesha Nakshatra

Pushya is the best match for Ashlesha Nakshatra males and females. The Nakshatra compatibility of Ashlesha Nakshatra with Pushya is stronger than other Nakshatras. When it comes to relationships, Ashlesha star natives do not find Pushya very challenging. They consider Pushya as boring and serious workaholics. However, once they get detached they start feeling attracted and inquisitive in Pushya natives. They develop an interest in Pushya and explore their personality. As per Nakshatra compatibility, once Ashlesha understands Pushya, they like Pushya’s witty, warm and sexy personality. However, it is advisable for Ashlesha to not have unrealistic expectations even though they find Pushya patient and very loving.

Ashlesha and Ashlesha Nakshatra's compatibility for marriage is excellent. Their relationship is strong and they easily understand the pain of each other. Due to similar characteristics, Ashlesha and Ashlesha accept each other. They embrace each other’s flaws which is very unlikely when they are with other Ashlesha compatible stars. In marriage, both Ashlesha-Ashlesha moves from detachment to attachment. They love spending time together and freely share their emotions and passions.

Also See: When Will I Meet My Life Partner Astrology

Ashlesha Nakshatra forms a unique bond with Ashwini star natives. They like their exciting, adventurous and friendly attributes. They instantly get connected to Ashwini in love and appreciate their idealistic and free-spirited nature. Ashlesha Nakshatra's marriage compatibility with Ashwini is based on mutual understanding. They recognize Ashwini as frank and independent like themselves and find it easy to trust them. In turn, this Ashlesha matching star understands the vulnerabilities of Ashlesha. They tolerate weaknesses and make efforts to establish a long-lasting bond with Ashlesha natives.

Uttara Ashadha is the worst match for Ashlesha Nakshatra males and females. As per Nakshatra's point of view, the Yoni of Uttara Ashadha is Mongoose which is the deadly enemy of Ashlesha’s symbol, the serpent. Both of them are sexually incompatible and have very low compatibility in other fronts of marriage. In terms of relationship, both Ashlesha and Uttara Ashadha hurt each other. The vicious and sarcastic nature of Ashlesha wounds Uttara Ashadha while the aggression of Uttara Ashadha burns Ashlesha. They both make miserable mistakes in marriage which becomes hard for anyone to fix or compensate for.

Ashlesha Nakshatra's compatibility with Swati star is challenging and despairing. They can be distant friends but once they get committed, they face hardships and misery. In the relationship, Swati faces hardships in understanding the expectations and desires of Ashlesha while Ashlesha finds Swati sexually boring. Most of the time, Ashlesha seeks pleasure outside the relationship. They couldn’t keep track of emotions and feel jealous and possessive when they find Swati detached and ignorant.

Ashlesha Nakshatra's marriage compatibility is not satisfactory with Rohini Nakshatra. They fall for the charm and witty intellect of their Ashlesha matching star but find them romantic, needy and emotional. Ashlesha star natives behave perversely with them. They run away from Rohin when they need them and come closer when Rohini shows ignorance and detachment. Rohini and Ashlesha's relationship is an unhappy saga of love where both bring out only the worst from each other. To make their relationship successful, they both need to accept each other and concentrate on each other’s positive aspects.

Best and Worst Match for Ashlesha Nakshatra Male and Female

Want to know who can be your best match for the marriage? Chat with an Online Astrology Expert and learn about your marriage compatibility with your prospective partner. Also, if you were born in Ashlesha Nakshatra, you can find accurate Ashlesha Nakshatra compatibility with the Nakshatra of your partner. At Anytime Astro, our expert astrologers can help you to find foreseen possibilities, strengths, weaknesses and various aspects of your relationship. So, tap to connect to your astrologer and take the first step to a blissful and successful marriage.