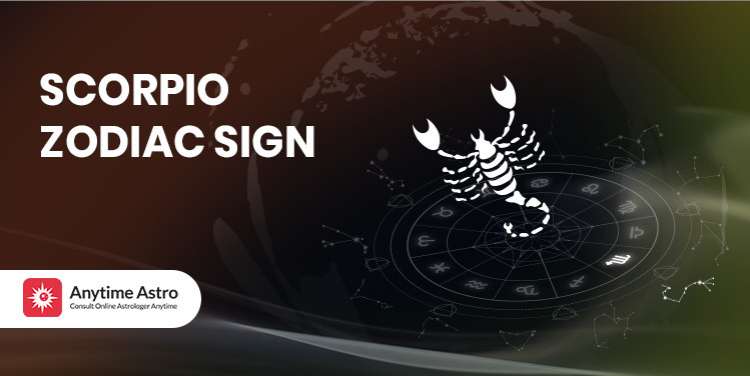 Scorpio, the eighth sign of the zodiac is the sign of secrets, power, control and intimacy. The word Scorpio came from Greek mythology. It was inspired by the story of Orion who was stung by a giant scorpion. In astrology, there are a total twelve zodiac signs including Scorpio. These signs are connected with four natural elements which are air, water, fire and earth. The Scorpio sun sign is associated with water.

Person born with the Scorpio star sign is called Scorpio or Scorpion. A part of the traits of Scorpio zodiac personality is intimacy. Scorpio zodiac sign strives for traditional relationships and serious commitments. At work, they are very competitive and do anything to stay on top. A Scorpion’s personality is not just limited to being harsh, but they are emotional, powerful and mysterious as well.

The zodiac signs in modern astrology are also assigned with a cardinal, fixed or mutable polarity which is it’s symbol of expression. The polarity or modality of Scorpio is fixed. The water in its element describes its intuitive and emotional nature, they crave for security and sensitivity in their lives. The fixed as its polarity represents their trustworthy and stabilizing nature, they present enthusiastic ideas and set goals for solid foundation. Pluto as their ruling planet describes spiritual susceptibility to the superconscious world.

Like most of the zodiac signs in astrology, the Scorpio sign symbol is also depicted by the face of an animal ie. a Scorpio.

The Scorpio sun sign symbol is guided by a Scorpion’s stinger. The Symbol of Scorpio or Scorpio’s Glyph represents Scorpio's extremely sexual nature by english alphabet “M”. The Scorpio symbol signifies connection of this zodiac sign with depth, intensity and obsession.

The ruling planet of the Scorpio sign is Pluto. Pluto is represented by a round figure on the crescent and a cross. It signifies the heavenly reception to the super world or to the superconscious which lies above the physical or materialistic world.

In modern astrology, there are a total twelve sun signs. These sun signs are divided according to date and month of a year. Every individual in the world is assigned with one of these zodiac signs according to his/her birthday. The Scorpio birth month is from October to November. Scorpio horoscope dates fall between October 23 to November 21.

Also See: What Are The Zodiac Signs By Month

Scorpio is the most intense sign in the zodiac. Individuals born with the Scorpio zodiac sign do not get fooled easily by other people. Their vision helps them to uncover most complicated situations and intentions of dishonest people.

Scorpio zodiac personalities are passionate and independent individuals. They do not shy away to flaunt their achievements as well as skills as they don’t care about other people’s reactions. They are extremely competitive as they love debates and are not afraid to express their point of view clearly even if it leads to conflict.

Due to their harsh traits, people who don’t know them well, often think they are cold hearted or intimidating. In reality, Scorpions are very emotional and vulnerable to their feelings due to water as its element. They seem strong and harsh from outside just like a scorpio, but deep down lies a loyal, loving and passionate person. A Scorpio has multiple personalities, it can be your most committed friend or your loyal employee or even your worst foe.

Individuals born with Scorpio sun signs are very cautious when it comes to their potential match. Initially it is very difficult to win the heart of Scorpio zodiac personality. But once you manage to do it you will be able to develop a very intense connection with them. They value honesty in their relationship more than anything else and remain generous towards their partners.

Also See: Will I Have Love or Arranged Marriage by Date of Birth

Scorpio- Strengths They Are Born With

The biggest strength a Scorpio personality is born with is not beating around the bush. Most of the zodiac sign personalities are diplomats who try to avoid a conflict by spending hours finding any alternative approach rather than facing truth. But this is not the case with Scorpio. Scorpio expresses fearlessly and honestly what’s on their mind without caring about other people’s reactions. With this honesty and forthrightness, individuals born with Scorpio birthdays earn tons of respect both in personal as well as professional life.

Scorpio zodiac personalities show themselves as tough individuals from outside and hide their true emotions. The biggest challenge they face is to express their true feelings and emotions. They remain confined in their bubble and sometimes distance themselves entirely from other people to hide their vulnerable side. Due to their this trait, other people often mistake them as cold, uncaring and prickly. This “I don’t care” face does not work for them for a long time and one day these emotions exhaust them or erupt unexpectedly leading to disasters.

Scorpions are blessed with the secret weapon of empathy. Although this secret weapon is unknown to most people, Scorpio zodiac personality can easily judge a person’s feelings. Due to this trait, they can easily sense who needs their tenderness, love, care or morale boost and do not hesitate to provide them to help them in their respective situations. The Scorpio zodiac personality also does a pretty great job in changing the mood of a whole room.

Some positive traits of people who are born in Scorpio Sun Sign are:-

Also See: What Is The Zodiac Sign for November Month

Some negative traits of people who are born in Scorpio Sun Sign are:-

So, here is a short and crisp insight for people born in Scorpio birth month. It gives a good glimpse of their capabilities and abilities, but it is not all. A Zodiac sign can tell you just one aspect of your inner self. For getting a whole analysis of your inner abilities, strengths, weaknesses, and future possibilities, you should visit Anytime Astro. At Anytime Astro, our Astro-psychics give an insightful analysis about your whole personality and your future opportunities on the basis of your personalized birth chart. Chat with a Psychic now!