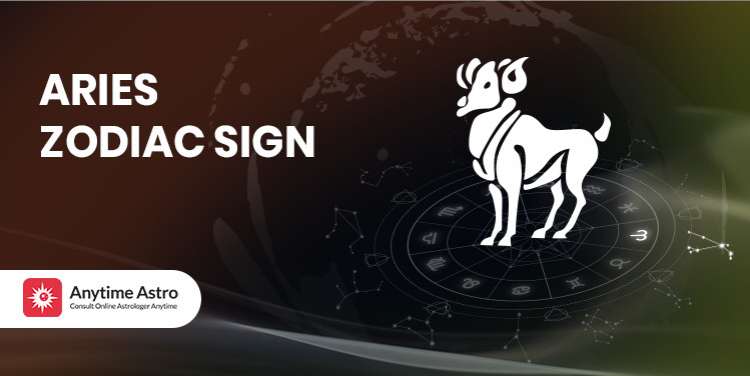 The first sign in the zodiac, the Aries sign is symbolic of great energy and turbulence. Aries zodiac sign is all about action. It is one of the most active astrological signs which tends to take action as quickly as possible. The people born with this zodiac sign are called Arians or Ariens. In astrology, there are only six positive zodiac signs and Aries is one of them. It is a symbol of Fire from the natural elements which symbolize the astrological signs.

Let’s get all the facts about the Aries star sign including the Aries symbol, Aries month, and personality traits of Aries

Each zodiac sign is associated with a character or symbol that describes them. The zodiac symbol of Aries star sign is the curving horns of a sheep, the Ram. The Aries symbol signifies stubbornness, rage, and driving energy. Aries just like sheep stay determined to their job until they finish it.

The ruling planet of Aries sign is Mars. Mars is represented by a round figure with an arrow coming out of it. This arrow is symbolic of a spirit coming into the world.

One of the twelve zodiac signs is assigned to an individual according to their birth date and month. Aries horoscope dates fall between 21st March and April 19th. People born between these dates have the Aries as their zodiac sign and are called Arians.

Also See: Who is Aries Soulmate

Aries are pioneers. A part of Aries’ traits is competition. That is why the best way to get a job done by an Aries personality is to turn that work into a contest. For winning that contest, they will give their full efforts and dedication. One who has an Aries zodiac personality is intelligent, passionate, competitive, and impulsive. They work with extreme dedication to manifest their goals and do not rest until it is done. Arians are multitaskers, at a time they can deal with multiple projects with extreme loyalty and intelligence.

It is a little bit difficult to become friendly with Aries birth month individuals, but if you stick on to them at initial days then your Arian friend will prove to be a blessing for you and will always have your back. People with the Aries star sign are frank, open with their beliefs, honest, and sometimes aggressive. They do not sugarcoat their opinions and that is why some people misunderstand them for being rude. They consider honesty and truthfulness above everyone else. If anything goes wrong, they might lose their temper very soon but this anger is only for a short while.

Aries- Strengths They Are Born With

Aries are born with the gift of determination and willpower. Once they set their goal, they do not rest until they bring it to reality. They work smartly using their intellectual power and do not get influenced by the opinions and criticism of other people. They are lone-wolves, they do not need anyone’s support to excel in their ventures and their overall lives.

Individuals with Aries as their Sun Sign are adamant and obstinate. They do not take someone’s alternative opinion on a specific matter into consideration and think of themselves as the most knowledgeable. These people are also restless and the world and situations around them tend to move extremely fast. Aries face some challenges in terms of love and relationships as they are not open to other people’s beliefs and feelings. To keep their relationships healthy, they need to embrace their partner’s as well as others’ points of view.

Iron is robust, inflexible, and can withstand extremely difficult circumstances and that is why it is the secret weapon of a person born as Aries. Aries are advised to take an iron-rich diet to boost their productivity, determination, and self-confidence.

Some positive traits of people who are born in Aries Sun Sign are:-

Some negative traits of people who are born in Aries Sun Sign are:-

Sun sign is just one aspect of your personality and gives you a generalized perception of who you are. Want an insightful analysis of what the future holds for you? Astro-Psychics at Anytime Astro will tell you what lies ahead in your life and your strengths and weaknesses on the basis of your birth chart. Chat with a Psychic now!