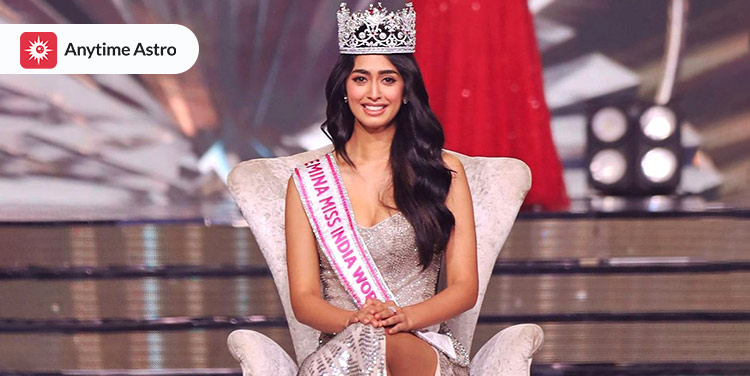 Sini’s stars were clearly in her favor on her grand day. Her Horoscope on the day she was crowned was strongly indicating her winning chances.

Sini is a Libra, so the position of the moon in Leo positively influenced her to become more creative while she was on the stage which helped her come up with answers that left people awestruck. Better results were promised due to this positioning and she was able to stay confident on stage. A libra would have felt very challenging on the given date which is why she was open to any challenge that came her way and dealt with it so gracefully. A boost in career can also be seen in Libra’s career, so this crowning will boost Sini's career and help her achieve her dreams.

As comprehended by the information given above, one can say that the stars aligned with Sini’s hardwork and zeal to help her win the Femina Miss India 2022 title.

Rubal Shekhawat from Rajasthan emerged as the first runner up and Shinata Chauhan from Uttar Pradesh was named the second runner up for the title.

She was born in Mumbai Maharashtra, in a Hindu family. Her father, Sadanand Shetty is the founder and director of Shikin Hotels.

An interesting fact about Sini is that she started dancing when she was 4 years old.

Apart from being passionate about her dancing skills, she was also a good student. She did her schooling from St. Dominic Savio Vidyalya in Mumbai and pursued her graduation in finance from S.K Somaiya Degree College of Arts, Science and Commerce.

Sini is fond of traveling and has been to many places like Germany and France.

She says that Priyanka Chopra is her inspiration and that she really looks up to her.