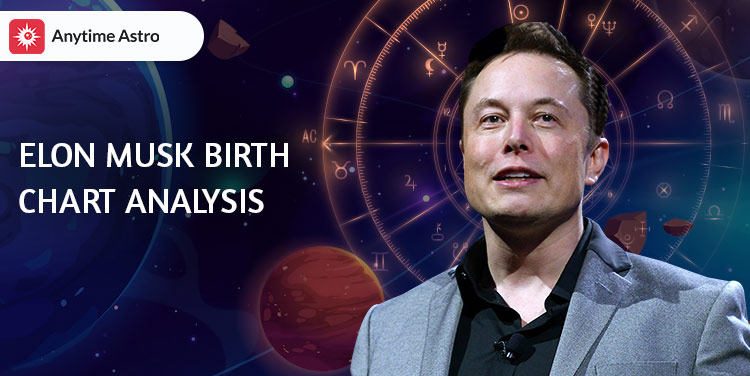 On June 28, 1971, Elon Reeve Musk was born in Pretoria, South Africa. Elon Musk is the richest person in the world, according to Forbes' real-time billionaire list, with an estimated net worth of over US$242 billion as of July 25, 2022. Elon Musk, the CEO of SpaceX and Tesla Inc., is regarded as the leading figure in innovation and cutting-edge technological requirements.

The cryptocurrency named after his dog has increased by 2,400% as if that weren't reason enough to brag. Everything the billionaire touches seems to turn out to be gold.

On June 28, 1971, Elon Musk was born. He, therefore, has a concentrated Cancer Sun and a logical Virgo Moon. Additionally, by examining his chart, we can see that his Sun and Moon are in a fortunate angle of harmony, which indicates that he has an easy time navigating life's patterns and is able to effortlessly balance his thoughts, feelings, and desires.

He is perceptive, kind, and skilled at accurately assessing people and circumstances because he was born under the Cancer Sun. Cancers are Cardinal Water signs, which means they have little trouble taking the initiative and asserting themselves, especially when they have an emotional stake in the outcome. This makes them effective leaders who can inspire followers to support them.

His Virgo Moon also stands out because people with this placement are exceptionally adept at reading between the lines, recognizing the finer details of circumstances, and then intuitively starting to construct a very clear approach to better future plans. The spirit of Virgo is that of a manager who can grasp the big picture while always knowing how to get from A to Z.

He is highly intelligent in that sense and probably a perfectionist, which on the one hand can make him critical of others and himself but also a testimonial to his great achievement. He can delegate at a high degree that I have never before observed in a janam kundali.

Astrology is an art form with a variety of applications, so it goes without saying that I can analyze a natal chart and anticipate a person's life cycles and personality traits. The birth chart can be thought of as a kind of blueprint and road map for how one can maximize their abilities and find ultimate fulfillment.

The core theme of Musk's planetary alignments encourages big success, money, and fortune, enabling him to persevere despite obstacles and grow more ambitious with each victory. Above and beyond, his outer planets, which typically relate to our influence on society and wider life issues, talk about his grander destiny.

First, Pluto, the planet of large riches and businesses, connects with Jupiter, the planet of luck and fortune. An extremely potent alignment between Saturn, the planet of authority and strength, and Jupiter follows. This shows that his rise has been gradual, but that his dedication to learning, discipline, and maintaining a high standard for himself and his work predestined him for long-term success and stability. He experiences above-average luck and a humanitarian outlook on life thanks to Jupiter's union with Neptune, the planet of imaginative visions and fantasy.

Finally, Pluto forms a lovely rapport with Neptune and Saturn. This demonstrates his expansive vision for humanity's growth and his strong drive to contribute to this next big step ahead. Professional success, enormous riches, and powerful power were simple for him to enter, and once he started to understand his innate capacity for dominance, he never looked back. These planetary aspects are all significant, but when they are all present, it is obvious that the stars have specifically favored him.

There will likely be odd behavioral changes in Elon Musk. Elon cannot rely on everyone's devotion and must take extra care of his health. Musk will occasionally use dishonesty, cunning, or trickery to advance in status, position, and authority. The urge to participate in unlawful or dangerous behavior will exist. Musk will feel he has benefitted from his love or sexual encounters.

As the year goes on, Musk might prevail in court or handle other issues. Over his competitors, Musk will have the upper hand. Any sincere initiative Musk undertakes at this point will be successful. Musk will defeat his adversaries and possibly win them over. Slander could be present. The mind may be disturbed by baseless scandals. The next three years will see Musk establishing new connections. There will be psychological joy. Financial security will also be quite good. There are numerous occasions for auspicious events.

Got questions about your career? Talk to our career Astrologers.

Need a deep insight into your Kundali too? Consult our top Astrologers online!