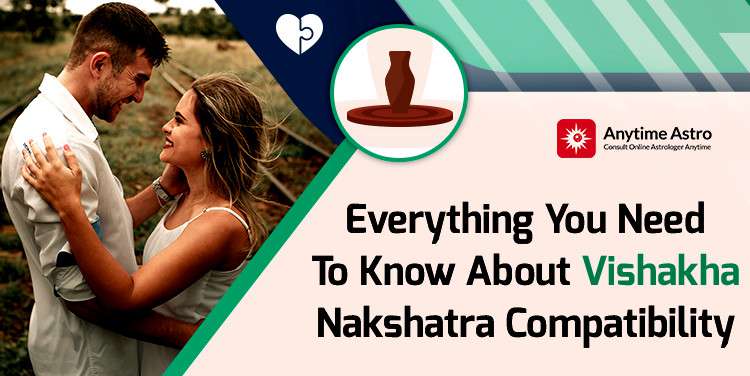 Vishakha Nakshatra also known as Vishakam in Tamil and Vishakham in Malayalam is the sixteenth constellation in astrology. Associated with Anthi Rajju, this Nakshatra literally means “The Coupler”. It is also known as rādhā "the gift". In the Indian zodiac, Vishakha Nakshatra is placed in: 20° Tula - 3°20' Vrishchika and in the Western zodiac in: 16° - 29°20' Scorpio. This female Nakshatra is ruled by Jupiter or Guru and faces downward. This particular constellation is very auspicious for marriages as it lies in Libra which governs marital aspects. The body parts associated with Vishakha Nakshatra are arms and breasts.

Are you thinking of moving ahead in a relationship with a Vishakha Nakshatra native?

Are you a Vishakha Nakshatra native and concerned about your love life?

In either case, you must understand Vishakha Nakshatra compatible stars before moving further.

Best and Worst Match for Vishakha Nakshatra Male and Female

According to Nakshatra Porutham, for Visagam Nakshatram

Sexually symbolised by a Tiger, the natives of Vishakha Nakshatra are a bit aggressive and dominating. In intimate activities, they like to be in charge due to their dominant traits. Sexually, they match best with Chitra Nakshatra which is also a tiger constellation. Those with Moon in Vishakha are greedy, possessive, skillful and quarrelsome. They are a bit on the obsessive side but it doesn’t mean that they do not possess any positive qualities. The natives of Vishakha Nakshatra are extremely determined towards their goals.

Vishakha Nakshatra Compatibility with The Most Compatible Nakshatras

Best match for Vishakha Nakshatra male and female is Chitra Nakshatra. They both share a very passionate, intimate and sensational relationship. Vishakha finds Chitra very desirable and sexually fulfilling. Chitra eases their lives by controlling their anxiety and in return, Chitra loves them with all their heart. Both Vishakha and Chitra share an emotional history which is the reason for their stronghold bonding.

Relationship advice- They both should exchange their thoughts and feelings to strengthen their relationship.

Relationship with Jyeshta Nakshatra is a deep heavenly affair for Vishakha Nakshatra. In this bond, they feel like they are on top of the world as their sensual approach deeply influences Vishakha. Jyeshta is filled with the divine knowledge of life. Their deep understanding of even the mysterious aspects of life helps Vishakha to get in touch with their inner angst. Jyeshta teaches Vishakha to be joyful by breaking the shackles of culture and tradition. They inspire Vishakha to move towards happiness.

Vishakha and Revati do not share a very healthy and fulfilling bond. Revati can switch its charming personality into something critical in the blink of an eye. No matter how much Vishakha tries, they just don't get along with them. Despite their constant efforts, Revati never gets pleased. Revati adds to Vishakha’s anxiety as they behave completely differently from their nature with them. Vishakha seeks love from somewhere else in this bond.

Vishakha loves the sensual and romantic personality of Rohini. Their unconditional love fascinates them but their insecurities, possessive nature and constant nagging make them irritated. Often, they both engage in heated arguments. Their never-ending demands and Vishakha’s inability to fulfill them are the cause of the rift.

Relationship advice- They should try to settle in a compromising position so that their bond becomes pleasurable instead of painful.

Uttara Ashadha Nakshatra natives are very doubtful, they need someone to constantly assure them about their positive points. Initially, Vishakha may fulfill their emotional needs willingly but with due course of time, they start feeling restless. Vishakha soon starts searching for their own needs. In this relationship, no one is ready to compromise and settle on a middle ground, they both want to move ahead on their own terms.

I hope this crisp blog has given you a pretty good insight into Vishakha Nakshatra compatible stars. Now, you are aware of Vishakha Nakshatra compatibility with its most and least compatible matches. Do you need to gain more clarity about your compatibility with your potential partner? Ask an expert astrologer on Anytime Astro and know about various aspects of your relationship including foreseen possibilities using your personalised marriage horoscope.