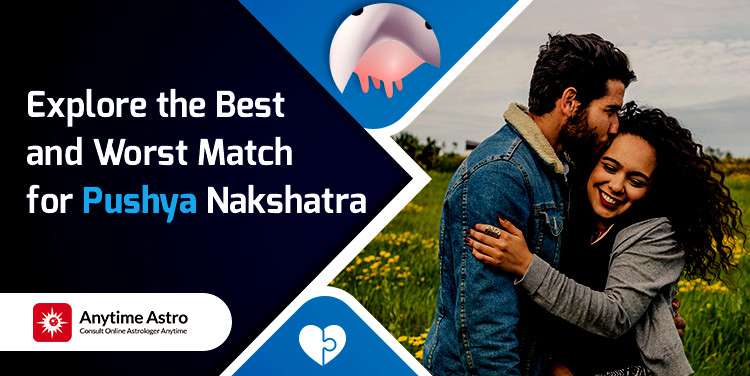 Pushya also referred to as Tishya and Sidhya Nakshatra is the eighth Nakshatra in the series of lunar constellations. Etymologically, Pushya means nourishing and auspicious. In the sky, this Nakshatra lies from 3°20' to 16°40' degrees in the Cancer zodiac sign. It is symbolized by “a milk yielding udder of a cow” and considered very auspicious in Vedic astrology. Pushya Nakshatra is ruled by Lord Brihaspati or Jupiter, the guru or mentor of Hindu deities. The ruling planet of Pushya is Saturn.

Pushya Nakshatra is associated with abundance, growth, opulence and nurturing abilities. It signifies fame and prosperity and is known to bestow qualities like honesty, purity, truth, good virtues, solace, religiousness, creativity etc. People born in Pushya Nakshatra display an aura of calmness and patience. They are benevolent, generous and humanitarian. These natives achieve their goals with hard work, concentration and strong perseverance. At times, they show negative characteristics such as narrow-mindedness, orthodox and possessive nature. They exhibit a dogmatic attitude and become headstrong about their principles.

Check out what are the best and worst Pushya Nakshatra matching stars for marriage.

Compatibility of Pushya Nakshatra with Other Nakshatras

Most Compatible Nakshatras for Pushya Nakshatra

Ashwini is the best match for Pushya Nakshatra males and females. The Nakshatra compatibility of Pushya Nakshatra with Ashwini is comparatively stronger than other Nakshatras. As per Indian astrology, Ashwini is attractive, magnificent and sexy. They take time to identify Pushya as their potential partner but once they get committed, they display full love and enthusiasm into their relationship. On the other hand, Pushya natives are patient and supportive. They wait for Ashwini and stay by their side in every up and down of their life.

Ashlesha and Pushya Nakshatra's compatibility is quite good. Their relationship is unconventional and bound with deep emotional ties. Ashlesha knows how to break the shell of Pushya and make them feel loved. Although Ashlesha loves Pushya initially, they don’t hesitate to leave them. However, once Ashlesha starts understanding Pushya’s nature, they exhibit a liking for them. Ashlesha natives love the warmth, steadiness and loyal nature of Pushya while Pushya feels drawn towards the sensual disposition of Ashlesha.

Pushya Nakshatra's marriage compatibility is good with the natives of the same Nakshatra. Their relationship is based on shared ideals and deep understanding. Pushya Nakshatra knows instinctively what their Pushya partner wants. They feel open with each other and share their feelings honestly without any hesitation. Pushya Nakshatra's compatibility with its matching star can be a little boring due to its pragmatic nature. However, the truth is that Pushya-Pushya marriage is full of love, humor and emotional commitment.

Also See: Who Is My Life Partner By Date of Birth

Purva Ashadha natives are carefree and lively. They keep changing their jobs, relationships, ambitions and philosophies throughout their life. The nonchalant nature is not liked by responsible and hardworking Pushya Nakshatra. Since Pushya Nakshatra desires a settled life, they struggle with this Pushya nakshatra compatible star. Pushya and Purva Ashadha are also the worst sexual partners. They share a spiritually complex relationship in which they display no understanding and cooperation.

Pushya Nakshatra's compatibility for marriage is poor with Shatabhisha Nakshatra. They lack the warmth and love that is needed for a happy and successful marriage. As per astrology, Shatabhisha display secretive and independent behavior. They keep their emotions within and do not allow any outlet for their feelings. Pushya Nakshatra finds it hard to communicate with Shatabhisha due to their reserved nature. They become too cold and haughty, feeling stuck in a relationship with Shatabhisha.

Best and Worst Match for Pushya Nakshatra Male and Female

Curious who is your best match for the marriage? Talk to an Online Astrology Expert and gain in-depth insights about your marriage compatibility with your prospective partner. Also, if you were born in Pushya Nakshatra, get accurate Pushya Nakshatra compatibility for marriage through online astrology consultation. Our expert astrologers may help you find foreseen possibilities, strengths, weaknesses and various aspects of your relationship. So, take a step to a blissful relationship with expert astrology guidance!