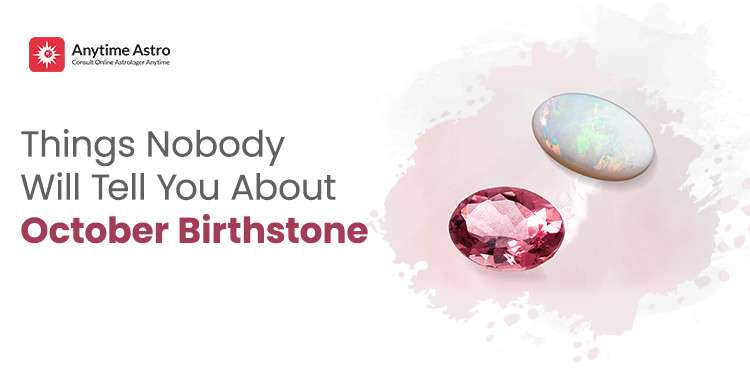 Were you born in the month of October? Are you curious to know what the lucky October gemstone is?

Curious which birthstone will be lucky for October-born people? Take a quick read and know everything that you need to know about the October month birthstone.

What Is The Birthstone For October Month?

According to modern and traditional classifications, there are two birthstones for the month of October. These are Opal and Tourmaline. Opal is the traditional birthstone for October known for its feminine appearance and mesmerizing play-of-colors. While Tourmaline is the Modern October birthstone having multiple colors in one crystal.

Due to the feminine appearance and durability concerns related to Opal, NAJ (National Association of Jewelers) recommended Tourmaline to be the primary birthstone for October month. However, any of these October gemstones can be worn by October-born people after consulting an expert astrologer. Both of these October stones are beautiful and can be chosen by gemstone connoisseurs because of their exquisite qualities and surprising benefits.

Curious to know more about these gemstones? Read on the post to find various interesting facts about October gemstones. Explore October birthstone’s color, meaning, origin, history, advantages, and much more.

As per Geologists, the first Opal relics were found in Ethiopia in around 4000 BC. Since then, this October gemstone has been revered by ancient mystics. Bedouins believed that Opal fell from the sky during thunderstorms and thus contained lightning in it. Greeks thought that having this gemstone may render prophetic abilities and protection against diseases. Europeans considered this Oct gem as an epitome of virtue, hope, and veracity. In modern times, Brazil, Ethiopia, Czech Republic, Honduras, Mexico, and the United States are said to be the main producers of Opal.

The name “Opal” is said to be taken from “Upala”, a Sanskrit word that means “ a precious stone”. This name was further modified in ancient Rome as Opalus. Some believe that the name “Opal” was taken from the Greek word, “Opallios” meaning “to see a color change.” The mention of this beautiful October gemstone can also be found in the writings of Roman Historian Pliny, the Elder. He wrote that Opal was the most valuable and expensive of all gemstones in the Roman Empire due to its “play-of-colors” phenomenon.

Tourmaline is supposed to be discovered in the 1500s by Spanish conquerors in Brazil. However, due to similarity in appearance, it was perceived as Emerald or Ruby or several other gemstones for centuries. As per Historians, this October stone was used by the Chinese to carve and engrave figures. African mystics used it to awaken people from “the dream of illusion.” In the 18th Century, this stone was believed to be beneficial for artists, authors, actors, and those in creative fields. Ancient Indians used this birthstone for October to gain insights and discover things that are good and auspicious. Due to the pyroelectric effect, Tourmaline was also thought to be a stone of enlightenment, spiritual power, and reconciliation by ancient alchemists.

Etymologically, this newer October birthstone has obtained its name from the Sinhalese word “Toramalli”, meaning “stone with mixed colors.” This name was conferred to Tourmaline due to its property of having an array of colors in a single crystal. Possibly, this is the reason ancient mystics considered this October birthstone as a symbol of artistic expression. Spiritually, Tourmaline is said to be a receptive stone signifying tranquility, wisdom, mysticism, and soothing energy.

Also See: How To Get Rid of Extramarital Affairs?

What Color Is The Birthstone For October?

The color of both October birthstones is beautiful and vibrant. Opals exhibit all the rainbow colors in a moving pattern of red, green, purple, yellow, pink, aqua, and blue. Whereas, Tourmaline possesses a variety of colors ranging from black to bluish-black to pink. As per Gemstone experts, each October stone color signifies a healing property. For instance, Pink Tourmaline speaks of love while the Black color in the October stone shows protection against the bad vibrations.

What Are The Benefits Of Wearing An October Birthstone?

Check out the various benefits of wearing your October birthstones, Opal and Tourmaline.

Did you know these unique and interesting facts about October’s birth crystal?

How To Care And Clean October Birthstone?

The hardness of Opal ranges from 5-6.5 on the Mohs scale, thus one should give extra care to this Oct gemstone. The best way to clean this stone is using warm soapy water. It should be noted that Diamonds, Sapphires, Emerald, and other hard gemstones can scratch this October birthstone.

Tourmaline is durable and enough to withstand light and most chemicals. Thus, you should use warm water, detergent, and a soft brush to clean this October Birthstone. Ultrasonic and steam cleaners should not be used for cleaning this gemstone.

Apart from birthstones for October month, there are various other gemstones that you can wear to bring good luck and fortune. You can consult our expert astrologers to know about these gemstones.

If you are born in October and unsure of the lucky stone for your zodiac or birth month? Chat with expert astrologers and find your lucky stone for success and wealth. Our expert astrologers can help you find the best gemstones according to your date of birth and horoscope. They can offer astrology guidance to maximize the energy of gemstones and make your life more happy and successful.

So, talk to an online astrologer now and pave your way to ultimate happiness!