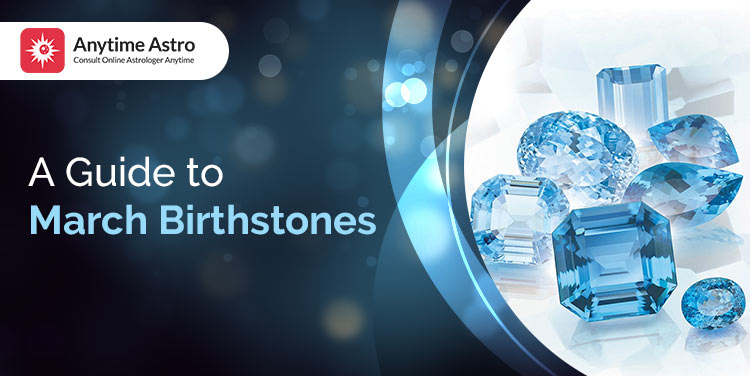 Were you born in the month of March? Want to know what is the birthstone for March?

Well! Your birth month plays a significant role in your life. The zodiac signs and planetary positions at the month of your birth determine your characteristics and shape your personality. It makes you who you are and if you wear a birthstone by month and day, you can enhance its positive effects and turn your luck. Likewise, people born in March month can also enhance their powers by wearing the birthstones for March. They can also wear March zodiac birthstones based on the March zodiac signs to gain benefits and improve their well-being.

Curious what are the birthstones for the month of March? Read the post and find everything you need to know about the March birthstones.

What is the Birthstone for March?

Here are the March month birthstones according to the list of Birthstones by month.

Although these March birthstones are widespread, there are many March birth crystals that are suggested on the basis of metaphysical and spiritual points of view. Thus, it is always advisable that you Consult an Expert Astrologer to know your lucky stone and maximize its benefits.

Interested to explore more facts about March Birthstone? Check out the March birthstone meaning and unravel the origin and history behind the two birthstones of March- Aquamarine and Bloodstone.

History and Origin: The name of Aquamarine comes from the Latin phrase, “water of the sea.” Having traces back to the Gregorian Era, this March stone comes in a green-blue variety of Beryl mineral. Aquamarine is mined mainly in Brazil, Asia, Colorado and Africa. It is also found in Southeast Asia, India, Pakistan, Russia China, Nigeria and some parts of the US. The best quality Aquamarine is found in Pakistan and Brazil.

March Birthstone Meaning: Aquamarine was considered to be “sailor’s stones” in ancient times. It was believed to protect sailors from the disasters of the sea. As per legends, this March gemstone was said to render mental clarity, well-being, happiness and eternal youth. It was thought to bring luck and bliss in marriage. There were also sayings that Aquamarine makes the wearer invincible, intellectual and amiable.

History and Origin: Bloodstone is also called heliotrope, the variety of Chalcedony. Its alternate name “heliotrope” has been derived from the Greek word which means “to turn to the Sun”. The first record of Bloodstone can be found in the 1550s. It is named because of its bloodlike spots. This Traditional March birthstone is mainly found in India. The other countries where this March gem is found are Australia, Brazil, China, and Madagascar.

March Birthstone Meaning: Bloodstone is a semi-precious opaque stone that is considered a talisman to gain longevity and physical strength. It was used as a symbol of justice. Legends say that Bloodstone was formed by the drops of Christ’s blood that fell on the jasper at the foot of the cross. It has been believed that it has mystic powers to heal and bring good luck and fortune. In ancient times, warriors used to carry Bloodstone amulets to heal their wounds and stop bleeding and negative energies. This march birthstone was thought to have abilities to clear vague thoughts, increase self-esteem, calm anxiety and prevent jealousy and the evil eye.

Also See: Best Day to Buy Gold in This Month

What Color is the Birthstone for March?

Like all the gemstones, the color of March birthday birthstones plays a very significant role in determining their value. Here are quick insights into both modern and traditional March birthstones’ colors.

Bloodstone color ranges from dark green to dark bluish color speckled with red or brown spots. The splatters of red or brown on Bloodstone are due to the inclusion of iron oxide, especially hematite. The dark green color is due to the presence of minerals Chlorite or Hornblende, a mixture of minerals. Since the color and number of spots on this March birthstone impact its gemstone value, the best quality Bloodstones are the ones with solid deep green color having visible deep bright red or dark orange spots all over the stone surface.

March Birthstones exhibit high positive vibrations that offer various benefits to their wearer. Here are the benefits that are offered by Aquamarine and Bloodstone.

Also See: Relationship Prediction Based on Date of Birth

How to care and cleanse March birthstones? It is easy! Both March Birthstones can be cleaned at home by using warm water, mild dish soap and a soft brush. You need to dry off the March gems always with a clean and soft cloth. Since the hardness of Aquamarine is 7.5-8 on the Mohs Scale and Bloodstone is 6.5-7 on Mohs Scale, caring for the latter is trickier. To keep the Bloodstone safe from getting scratched, it is recommended to always keep it in a soft fabric.

Born in March? Is Pisces or Aries your zodiac sign? Expert astrologers can help you know your lucky March birthstones and the right way to wear them. So, Chat with an Online Astrologer now and explore the best gemstone for your zodiac sign. Your March birthday birthstone can change your luck and you may accomplish the heights that you have always dreamt of. Unravel the future! Chat with Psychics now!