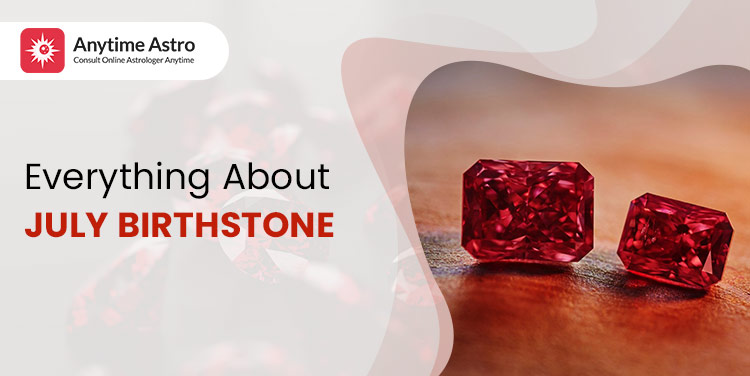 Were you born in July month? Do you want to know what gemstone is for July born?

Well! July is the fifth month of the Gregorian Calendar and the month of activity, expansion and hard work. It is spiritually the sign of movement and is attributed with all kinds of transformation. The energy shifts in July bring strong vibrations and thus astrologers suggest July gemstones that are based on July zodiac signs and July month dates.

In this post, we have discussed one such July birth crystal that is determined by the month. So, if you are born in July and curious to know what is a birthstone or gemstone associated with July month, then read on the post and explore everything about July birthstone, birthstone color of July, benefits and much more.

What is the Birthstone for July Month?

Ruby is the July gemstone or birthstone for the month of July. According to both traditional and modern birthstone classifications, Ruby is the best gemstone for people born in July month. It is a colored variety of mineral species, Corundum and is one of the most expensive birth month gemstones. Ruby is considered one of the hardest gemstones after Diamond. The July birthstone is a traditional cardinal gemstone that is ruled by the planet Sun. It is associated with the Fire element and exhibits the vibration number of 3 as per the Numerology of Gemstones.

Ruby was referred to as the “King of Gemstones” or “Ratnanayaka “ in ancient India due to its beauty, rarity and mystical powers. Indian Kings considered it as the symbol of glory, power and status. They used to believe that this July birthstone could predict misfortune or adversity and attract prosperity. As per Hindu mythology, the red glow of July’s birth crystal is due to an internal flame that cannot be extinguished. It was considered an auspicious gift that can be offered to Lord Krishna and Lord Buddha. Records suggest that Burmese and Chinese warriors and noblemen used Ruby as a protective stone. Medieval Europeans surmised that this July gem brings heath, wisdom, wealth and success. To this date, Rubies are always in demand owing to their gem quality and significance It is mined mainly in Thailand, Sri Lanka, East Africa, India, Pakistan, Kenya, Nepal and Afghanistan. The best quality Ruby is found in Myanmar.

The name of Ruby is derived from the Latin word “Ruber” which means red. Throughout the ages, this July birthstone accrued various symbolic and spiritual meanings. It represented nobility, purity and passion and was considered a stone of fortune and courage. It was believed that it contained the drops of Mother earth’s blood and have the key to the life force. Ruby’s spirit is thought to shatter or turn dark in the presence of evil or danger.

What Color is the Birthstone for July?

Pink to all shades of Red to deep crimson is the birthstone color of July month. As per Gemstones experts, the trace element Chromium is responsible for the variation in the July stone color. It is said that the more is the Chromium traces in Ruby, the stronger is the redness of this July gemstone. The Rubies with the higher iron content will have darker color but less shine as iron reduces the shining effect. Since the July birthstone color is the main basis of its value in the market, the darker red July gem is considered higher prized.

What are the Benefits of Wearing July Birthstone?

Check out the various benefits gained by wearing your July birthstone, Ruby.

Did you know these unique facts about July’s birth crystal, Ruby?

Also See: When Will I Get Married According to Date of Birth

How to Care and Clean July Birthstone

July birthstone can be safely cleaned at home with warm water and a soft brush. It can help you retain the shine of your July gem. You can use a soft toothbrush to scrub the Ruby gently. After cleaning, make sure you use a lint-free cloth to wipe it. Avoid storing your July birthstone in a container or bag with other gemstones. Keeping them separate may guard them from scratching and getting easily damaged.

In addition to Ruby, there are various alternate birthstones for July month that can be worn. Sapphire, Onyx, Carnelian and Turquoise are the major July gemstones that bring luck and abundance to the people born in July month.

Unsure which July birthstone is lucky for you? Want to know what’s the birthstone for July 1- July 31? Chat with Online Astrologer and know everything about your lucky gemstones. Our expert astrologers would help you with the best gemstone for your birthday and zodiac signs. You can also get astrological guidance for wearing the July birthstone right and enhancing its powers. So, don’t wait anymore. Find your lucky stone with live astrology consultation!