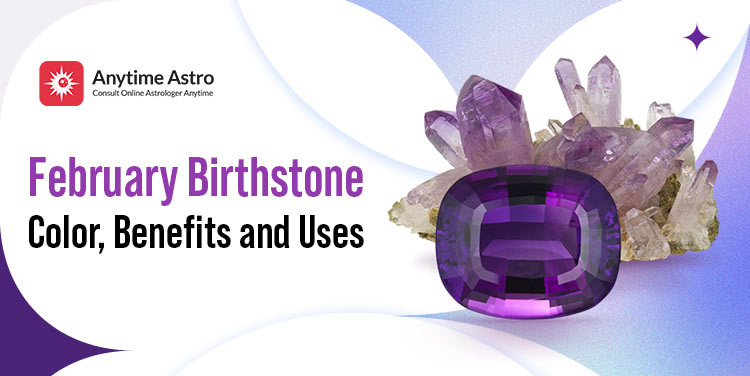 Are you born in February and also a gemstone lover? Then you must surely be curious to know your Feb birthstone. Well, in this blog, you will know what is the birthstone for February. And also its aesthetic and metaphysical properties.

To put an end to your curiosity, let me at least tell you the name here. And later, we’ll know the February birthstone meaning and other things.

It is Amethyst that is designated as the official birthstone of the second month of the year.

The first known evidence of Amethyst dates back to the 1600s, which was re-discovered three centuries later, in the 1960s. However, this was included in the list of all birthstones in the 18th century.

The birthstone for February-born people has always remained to be Amethyst in the ancient, traditional, and modern list. So now, let’s see the qualities of this gemstone that make it so desirable and perfect. One is definitely the February birthstone color, but let’s know some others as well.

Benefits of The Birthstone of February

Now when you know what is the birthstone for February, let’s get to other things. Amethyst is a gorgeous gemstone used to create brilliant jewelry along with benefitting its wearer in unbelievable ways.

We’ll see the advantages of wearing the birthstone for February in various aspects of one’s life. But first, let’s see how the whole mechanism works.

The energies disseminated by the birthstone for February resonate well with the vibrations of those born in the same month. This works as a catalyst for improving the weak aspects of their lives and helping them lead a more fulfilling life.

So what are the various aspects of life in which the benefits of wearing Amethyst can be enjoyed! Let’s see.

If you are wondering about what are the 'physical benefits of my birthstone for February,' you must know that Amethyst has many medical benefits. They can prove to be beneficial in improving your physical health by preventing and, in some cases, even curing the ailments. The physical areas that can be improved with the vibrations of Amethyst are as follows:

These are the most prominent health benefits of keeping the February gemstone near for long periods. The best thing is that you don't need to necessarily be February born to take advantage of this gemstone. You could be the native of any month and still be benefiting from this. It’s just that the birthstone of February is a little biased for February natives, which is obvious.

Also See: Which Day is Good to Buy Gold

Amethyst, the designated birthstone for February, is the one that provides physical benefits to its wearer and also supports mental well-being by eliminating stress. If you are already impressed with the physical health benefits of the gemstone of February, then wait until you know the emotional and mental benefits.

After knowing what’s the birthstone of February, let’s see the most recognized mental benefits of wearing it.

These are some of the emotional and mental benefits of wearing the February star stone. These can be utilized over a long course of time.

If you think the above-mentioned are the only benefits of Feb birthstone, let me tell you something more. Yes, it is the spiritual benefits associated with the February birth crystal used to uplift your soul.

Let’s see what they are and how they help.

These are the spiritual benefits of Feb gemstone, Amethyst, that can be utilized to live a more fulfilling life with clarity in mind.

In Greek mythology, the civilization responsible for giving ‘Amethyst’ its name, it is believed that February stone can prevent people from intoxication and drunkenness. This is the reason why in ancient times, containers made of Amethyst were used to consume alcohol.

The word amethyst is derived from the Greek word ‘Amethystos’ that literally translates to ‘not drunken’ thus, justifying the belief.

Now, we know the benefits of the royal and gorgeous gem that is the birthstone of February. It's time to see the various ways in which it can be used.

Also See: Lucky Date to Open A Business in 2021

How Amethyst, The Birthstone for February, Can Be Used

To enjoy the benefits of this gemstone, it can be used in various interesting ways. I have mentioned some of the most common ones here.

Now, you know a lot about the benefits and uses of the February gemstone, it's time to gain knowledge about the aesthetics of this beautiful gemstone. Also, we will know the prime locations on the Earth where these are found.

Aesthetics of Amethyst, the Feb Birthstone

The February birthstone color is an attractive purple, and it is a member of the quartz mineral family. The color of this gemstone can range from lilac to deep grape-purple. This color results when the radiated iron particles are included within the rock during the Amethyst formation process.

The birthstone for the month of February is so gorgeous that it is even used in its raw form to create jewelry that holds the capacity to make the wearer stand out from the crowd.

Another way is to give it a faceted appearance by cutting and polishing the gem.

And sometimes, they have a smooth pebble-like appearance which is called Amethyst cabochon.

No matter in which form this stunning gemstone is used, its aesthetic appeal is never sacrificed.

Primary Sources of The February Stone

A considerable quantity of Amethyst is sourced from Brazil and Uruguay. However, South America, Russia, and Siberia are the other places from where this gemstone is obtained to be traded in the whole world.

So, now you know what is the birthstone for February and everything about it. These benefits can be enjoyed by anyone who keeps an amethyst near them irrespective of their birth month.

Still, if you are too particular about it, you can know the birthstones for each month and choose to wear the one you want.

Although Amethyst, the birthstone for February, has many benefits, it is recommended to take experts’ advice before wearing it for any reason other than enhancing your appearance.

To get the best guidance, you can talk to our experienced astrologers and psychics and know if you will get the desired and intended benefits from wearing the February gem.