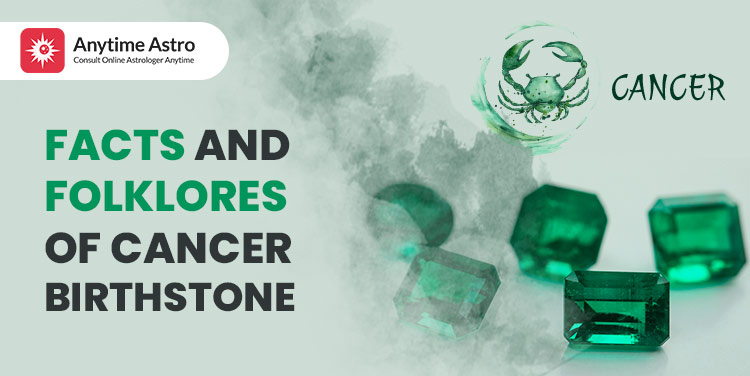 When it is asked, what is Cancer gemstone, there is no other gem better than Emerald that can answer the question.

In this blog, we will see what makes Emerald, the birthstone of Cancer zodiac sign alluring. And how it can benefit the Cancer natives. We will also know the meaning, benefits, origin, and other aspects related to the existence of this gorgeous gemstone.

What Is Cancer Birthstone?

Birthstones are the gemstones associated with the people born in a specific month or under the same zodiac sign. The energies of these gems resonate with those of these people. This makes their lives easier in various aspects and during different phases. When we consider crystals for Cancer zodiac, then the most suitable answer remains to be Emerald.

Now, since you know what is Cancer birthstone, we will learn many fascinating things about this gem in this blog.

The first known evidence of Emeralds is known to be as old as 4000 years. They are believed to be traded in the Babylonian markets during that time.

2000 years after that, these stunning gems became associated with the queen of Egypt, Cleopatra, for her fondness for Emeralds. This was primarily due to the Cancer birthstone color and its beauty. Her possessiveness for this gemstone can be seen from the fact that she owned Emerald mines. These were taken over by the Romans after her death.

In India, Emeralds, the crystals for Cancer zodiac, were worn by the Mughal Emperor, Shah Jahan. These gems were embedded in his jewelry along with the inscribed sacred text. For your information, Shah Jahan is the person who conceptualized the Taj Mahal, one of the seven wonders of the world.

Then approximately 1000 years after that, these gems were used by Mexicans, and residents of Peru, and Chile for various purposes. But it was not as the Cancer zodiac sign birthstone yet.

Later the birthstone of Cancer zodiac sign became the reason for wars, conflicts, and controversies between communities and civilizations. This even gave rise to the formation of a group called ‘Esmeraldos’ or Emerald bandits. They lived near the largest Emerald mines of Muzo and prevented anyone from mining this gem.

Fast forward to today, Emerald is one of the four precious gemstones along with Sapphire, Ruby, and of course, Diamond. It can now be worn by anyone who owns it legally. Also, it is renowned for its fame as the birthstone for Cancer man and women.

We will get into the details of what color is Cancer birthstone, and where it is found later. First, let’s see the spiritual meaning associated with it and how it benefits everyone, making it one of the best Cancer stones to wear.

There are various aspects of one's life in which the Emerald stone works as a brilliant support system. Let’s see what these are.

In Creative And Imaginative Ventures

If you are into a creative profession that utilizes your imagination ability every now and then, wearing Emerald in any form will prove to be beneficial. The positive vibrations of this gemstone resonate with the wearers to improve their conceptualization and implementation powers. This proves to be a brilliant birthstone for Cancer man as well as women.

Emerald, the Cancer zodiac sign birthstone, is famously known as the ‘Stone Of Prosperity' majorly because of the emotions represented by its green color. It opens up the opportunities for the wearers to expose themselves to better-earning opportunities, thus ultimately leading to their financial growth.

In Providing Wisdom And Intellect

Emerald, the Cancer zodiac stone, has been associated with the planet Mercury that represents intellect. This is why this gemstone is also believed to improve the logical thinking and wisdom of the wearer. It is recommended to wear an Emerald while preparing for any competitive exams.

Emeralds, the crystals for Cancer zodiac, work wonders for those who have difficulties articulating their thoughts and emotions. The energies of this gemstone resonate with the throat chakra to improve speech. Apart from that, it also helps the wearer gain confidence that plays a significant role in expressing oneself.

Emerald is the gemstone that can prove to be a very beneficial birthstone for Cancer man and women for establishing a harmonious marriage. It helps to resolve the stressful issues arising between partners due to misunderstanding or any other reason. Emeralds can directly be related to a happy married life.

Now you know what is Cancer birthstone. So, you should also know that all the benefits mentioned above can be taken advantage of by anyone. But if you are a Cancerian, you will be the beneficiary of favoritism of this gem.

Also See: When I Will Get Married According to My Birth Date

The ancient Egyptians believed that the Cancer zodiac stone is associated with rebirth. This is why placing it on the deceased person's throat was an essential part of the process of mummification. They believed that it facilitates the journey of the soul from this realm to the higher one.

In the ancient history of Rome, Cancer birthstone color is considered the most soothing shade of green. In fact, it was the source of relief for the eyes of lapidaries after long working hours. It was believed to comfort them and soothe their weariness and lassitude. Since then, Emerald has gained its popularity as a source to relieve stress and eye strain. After knowing what color is Cancer birthstone and seeing it, you must know the reason very well.

Emerald is the green-colored member of the Beryl mineral family. This is one of the best Cancer stones to wear. Apart from its cut and clarity, it is the Cancer birthstone color that makes it one of the most favorite gemstones of people. The primary sources of the best quality Emerald are Colombia, Brazil, and Zambia. But like many other zodiac signs stones, it is also mined throughout the world from Pakistan, Russia, the United States of America, Afghanistan, and Australia.

The fondness of jewelry wearers, gemologists, and gem collectors for this beautiful gemstone has grown over the years, each time, for a new reason. After knowing what color is Cancer birthstone, you must know the most significant one.

The qualities and magical benefits of Emeralds fit perfectly with those born under the Cancer zodiac sign. This even makes it one of the best Cancer stones to wear.