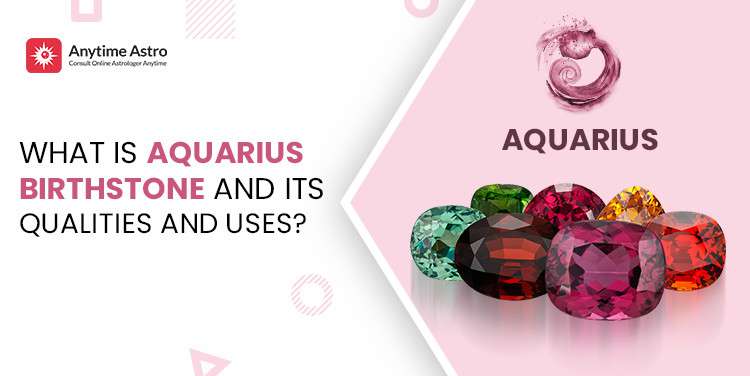 Have you ever heard of Aquarius birthstone? Do you know what is your birthstone for Aquarius and how it can help you gain success and wisdom?

Well, birthstones are the special gemstones that bring luck, wealth and good health. They exhibit powerful vibrations and offer various benefits to the wearer. Generally, birthstones are determined by month and zodiac signs. If you are born between January 21 and February 18, then wearing an Aquarius birthstone can prove to be really beneficial for you.

An Aquarius birthstone is a zodiac birthstone that empowers your personality and boosts your inner powers. It helps you overcome your weaknesses and gain success and stability in life. This is especially true if you are the native of Aquarius zodiac. If you are facing setbacks or want to make yourself substantially better, then an Aquarius birthstone can be your lucky charm. Want to know what is the birthstone for your Aquarius sign?

Read on the post and explore everything about the Aquarius birthstone.

What is Aquarius Birthstone?

Garnet is the birthstone for the Aquarius zodiac sign. It is not a single mineral but a group of silicate minerals that have the same crystalline structure but different chemical composition. Traditionally, Garnet is considered a birthstone for the month of January. It is worn as a lucky birthstone by both January-born and Aquarius-born people.

As per gemstones experts, there are more than 20 species of Garnet that are found in the world. However, there are only a few Aquarius stones that are considered commercially important. These main gemstones are Almandine, Pyrope, Spessartine, Grossular, Andradite, Mozambique and Uvarovite Garnet.

What Color is Aquarius Birthstone?

Garnet is found in a variety of colors. However, the primary and most common Aquarius birthstone color is red. The secondary colors that are found in Garnet are orange, yellow, purple, green, brown, pink, blue and black. There are also color-changing Garnets that change their hue in natural and incandescent light. When it comes to purchasing an Aquarius gemstone, gemologists advise to not go for a specific Aquarius birthstone color. They suggest choosing the Aquarius stone with good color intensity in order to have the best results.

History and Meaning of Aquarius Birthstone:

The name Garnet is derived from the Latin word “Granatus” which means “Pomegranate”. This name was conferred to Garnet due to its similarity with the pomegranate’s red color. According to ancient texts, Garnet has been used as an abrasive since the Bronze age. Egyptian Pharaohs used this stone to adorn royal necklaces. Likewise, ancient Romans used Garnet as a stamp to secure important documents. In Spanish astrology, this Aquarius birthstone was considered as a representative of the Sun.

Australia is the main producer of Garnet crystals. Half of the Garnet deposits are found In Australia while the rest of the deposits are obtained from the USA, China and India. The other countries where this Aquarius zodiac stone is mined are Tanzania, Madagascar, Namibia, Myanmar, Brazil, Iran, Afghanistan, Pakistan, and Sri Lanka.

What are the Benefits of Wearing Aquarius Birthstone?

Garnet, as the birthstone for Aquarius, comprises strong protective energies and healing powers. It exhibits powerful vibrations that enhance positivity and induce calming effects. Want to know more about such miraculous stone’s benefits? Read on and explore the various advantages that you may gain by wearing your Aquarius zodiac stone.

There are various interesting facts about Garnet that are lesser-known to you. Check out these amazing facts and enhance your knowledge about the Aquarius birthstone.

How to Care and Clean Aquarius Birthstone?

Garnet can be cleaned easily using warm soapy water and a soft brush. Since these are quite brittle, it is advisable to not keep this Aquarius zodiac stone with any other stone that may leave scratches. Steam cleaning is not advised since Garnet breaks when exposed to a sudden change in temperature. For proper care, always scrub the Garnet gently and pat dry it after rinsing.

Even though Garnet proves to be very beneficial for Aquarius natives, there are various gemstones that are recommended to wear for good luck and wealth. These are birthstones by month and lucky stones based on your horoscope and planetary positions. You may know about these gemstones and can figure out your lucky stones by consulting expert astrologers.

At Anytime Astro, you can find a team of expert astrologers that may help you know about the most suitable birthstone according to zodiac sign, month and current planetary conditions. They may share ways to energize your birthstone and can offer astrological guidance for improving your life aspects.

So, what are you waiting for? Take the first step towards your success. Chat to Expert Astrologer and make your future bright and prosperous!