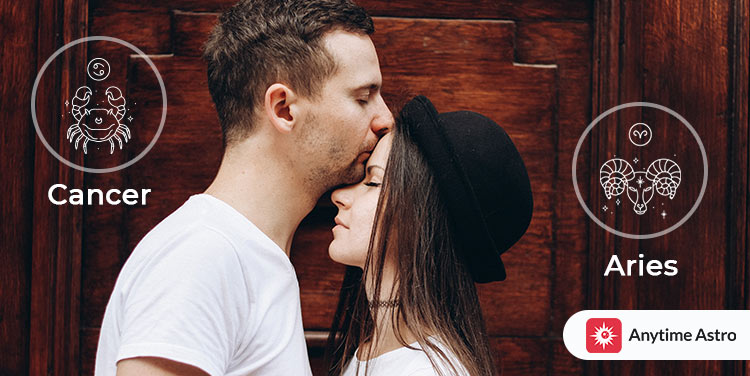 Bring Bliss Into Your Relationship

Do Cancer likes Aries? Are Cancer and Aries a good match? Why are Aries women attracted to Cancer men? Unleash the Aries women- Cancer men compatibility in detail with this quick guide.

In this post, you may learn about all the aspects that affect an Aries female- Cancer male relationship in love or marriage. Also, you may find about the challenges that are faced by an Aries woman and Cancer man as a love match.

But before that let’s understand how is Aries as a woman and Cancer as a man.

To understand the compatibility of Aries and Cancer, we should first have an idea of how they are as a man and a woman.

Aries as a Woman

Confident, ambitious and bold, an Aries woman is a fiery soul. She is highly motivated and has a very modern and self-reliant approach. With her vigor she inspires other women and motivates them to achieve things that are said to be impossible. As per Aries love compatibility, in general, she tends to be romantic yet bossy. She speaks truth bluntly and is often considered insensitive and satirical. Ruled by Mars, Aries female exhibits passion and spontaneity. She exudes confidence in all areas of life and that is why she is often referred to as an alpha woman.

Ruled by the Moon, a Cancer man is extremely emotional and intuitive. He cares for everyone and loves nurturing his family and children. In fact, he commonly puts the happiness of his loved ones ahead of his own. He can sacrifice his desires for his loved ones. When it comes to relationships, a Cancer man comes off as a perfect partner. He adores his partner and shows extreme dedication and loyalty in love. However, at times, he becomes clingy in relationships. He wants to spend most of his time around his partner even though it feels annoying. Tom hanks, Tobey Maguire are some of the famous male Cancer celebrities that live up to this zodiac sign.

Is Aries Woman and Cancer Man a Good Match? 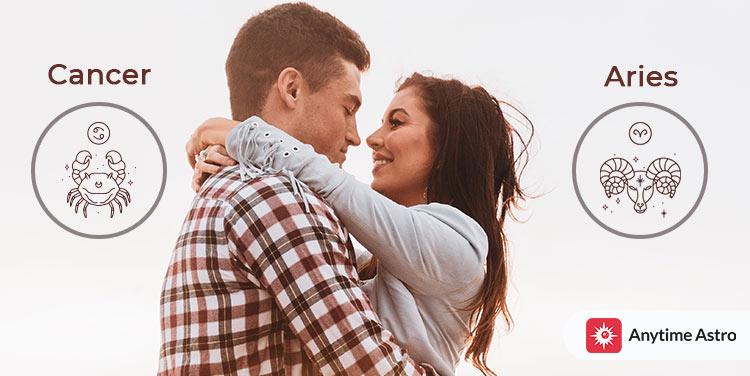 Ready to decode the Aries woman-Cancer man relationship. Read on and discover the interesting insights about Aries women and Cancer men compatibility in detail.

Aries female - Cancer male are quite opposite to each other. Where Aries female is impulsive and bold, Cancer male is calm and patient. They both take time to develop friendship but once they understand each other, they become fast friends. In the Aries woman and Cancer man relationship, an Aries woman is the first person who makes the first move. Aries women like the sensitive and audacious approach of the Cancer men. On the flip side, Cancer men like to hang out with Aries women, mesmerized by their assertive and highly positive approach. Together they both acknowledge each other’s differences and spend most of their time understanding each other’s thoughts and feelings.

Aries Woman and Cancer Man: When Dating or in Love

Despite opposite personalities, an Aries woman-Cancer man gets drawn to each other through a strong sense of attraction. Their ambitions and desires are the same and thus they connect quickly to one another in the initial stages. As in person, the Crab reflects a shy and reserved nature. They act slow and take time to understand Aries and their bold ways. On the flip side, Aries women move swiftly in matters of love. They complement Cancer men and help them to give up their hidden fears.

When in love, the emotional Cancer male comes across as an ultimate partner to the Aries female. She feels thrilled to have a person who makes her feel special and desirable. Likewise, an Aries female fills a Cancer male’s life with vigor and happiness. They try to strengthen the Cancer man- Aries woman relationship by cherishing Cancer’s sentiments.

An Aries woman and Cancer man relationship is quite balanced. They know how to keep harmony and make things happy and peaceful. When it comes to marriage, Cancer man-Aries woman compatibility stands strong at various aspects. They both connect well on trust, intimacy and common beliefs, the strongest factors for a long lasting relationship.

In Aries women- Cancer men marriage, Cancer male nurtures Aries female by taking care of her needs. He manages home, helps in household chores and allows the female Aries to express her power and fierceness. In turn, an Aries woman makes the marriage exciting and vibrant. She respects the feelings of Cancer and stays loyal and dedicated to her Cancer soulmate.

Challenges in An Aries Woman and Cancer Man Relationship

The differences in personalities of Cancer men and Aries women bring various challenges in their relationship. They both have different approaches to life which often affects Aries female-Cancer male compatibility in love or marriage. Where Cancer acts soft and compassionate to people, Aries behaves impulsive and aggressive in matters. They both clash over monetary aspects and find each other irrelevant and annoying.

Mostly, the female Aries in Aries woman-Cancer man relationship is dominant and bossy. She wants to be free and doesn't like male Cancer to behave clingy and possessive. Likewise, the moody Cancer men don’t understand the impatient and careless nature of Aries women. He seeks more sensibility from his partner, be it in emotional, family or monetary affairs.

An Aries woman- Cancer man relationship can go distance if they both could overlook their differences and learn to compromise. Both the signs should trust each other and try to communicate clearly in order to curb the minor doubts and misunderstandings. Moreover, adapting with each other’s lifestyle and making changes in nature may also help to strengthen a Aries woman - Cancer man or Cancer woman- Aries man compatibility in love.

Do you want to check your zodiac compatibility with your partner? Speak to an astrologer online and gain detailed insights into your relationship and other life aspects. Explore the strong aspects of your bond and know the things that may hamper your connection. Also get solutions for your relationship’s problems and learn the possibilities that may make your relationship long-lasting and blissful.