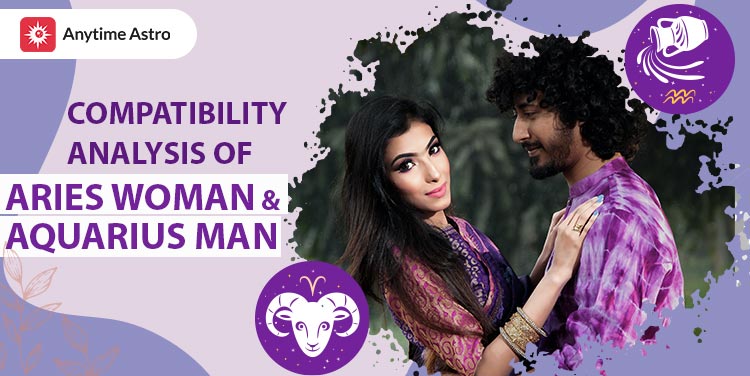 Aries woman and Aquarius man tend to attract each other spontaneously. They are ruled by the fire and the air element respectively, which creates a spark in their relationship.

Aries woman and Aquarius man compatibility can be good enough to make their relationship last for a lifetime. This duo shares a lot in common which will eventually contribute to strengthening their relationship.

Let’s know more about the Aries Woman and Aquarius man compatibility in this blog. Keep reading!

Aries Woman has a significantly high degree of compatibility in every aspect. Have a look at the table below to know.

A male Aquarius is ruled by planet Uranus which bestows him with intelligence, self-dependence, and excellent communication. While the Aries woman is ruled by Mars which makes her brave, compassionate, and fierce.

An Aquarius man can analyze and resolve any issues carefully. Whereas, female Aries is ruled by the fire element due to which she is courageous, enthusiastic, and impetuous.

This duo shares some similar personality traits that can contribute to establishing a healthy bond with one another. The free-spirited nature, independence, fun, and spontaneity of a woman born under Aries will attract an Aquarius man. While the independent, uninhibited, freethinking, unique approach to the life of an Aquarius man will appeal to Aries woman.

When Aries woman and Aquarius man decide to get into a relationship, they will not get bored with each other. An Aries woman must recognize that a male Aquarius acquires some unique quality. When he is sad, he feels cheerful, and when he is happy, he feels sorrowful. Occasionally, he feels things the other way around. An Aquarius man is straightforward by nature. However, he will be more rational and practical when dealing with the emotional situation of a female Aries, rather than becoming emotional himself.

On the other hand, an Aries female likes to express her ideas and opinions to her Aquarius soulmate. Her words and opinions are also quite blunt, and she has a tendency to express herself with a lot of excitement. The relationship between an Aquarius man and an Aries woman may have both advantages and disadvantages due to her cold attitude. This couple has their own way of expressing their feelings to each other. 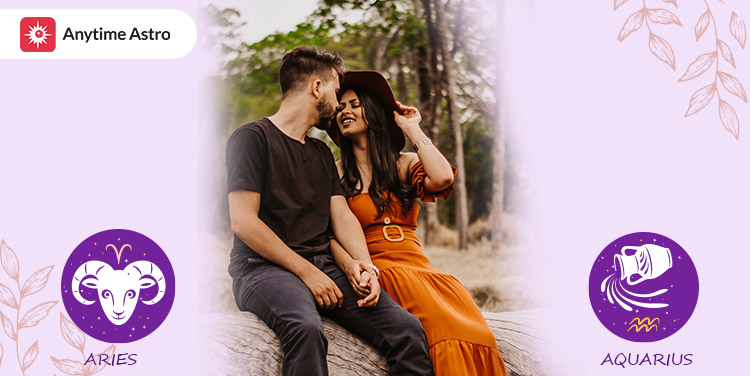 When it comes to the sexual life of this duo, they are likely to have an exciting physical intimacy because they share a lot in common. Although they will take some time to trust each other, once they do, sparks fly high. The Aquarius mate of Aries is likely to be overwhelmed by her voracious appetite for love. Nevertheless, he is determined to make it happen, and he will succeed.

This couple is likely to have a good level of communication and understanding as they share so much in common. But, they will also have to accept each other and be more compassionate.

One thing this duo has in common is the ability to express themselves. Having said that, he may need to write down his thoughts rather than verbally express them. In contrast, she might take "expression" to a new level, one that is very loud.

It can be inferred that both of them have concern and sympathy for each other and this also adds to the Aquarius man and Aries woman compatibility.

Final Thoughts On The Compatibility of Aries Woman and Aquarius Man

Aries woman and Aquarius man compatibility is believed to be significantly high. However, they will have to take care of certain things to experience a benevolent ride in their relationship.

They must work on accepting their differences both alone and together. Aries woman needs to be able to be herself and pursue independent interests. On the other hand, the male Aquarius is a spirit of the community who thrives on collaboration with like-minded friends and colleagues.

To conclude, an Aries woman and Aquarius man will be able to strengthen their bond only if they stay calm and composed while dealing with each other. If you are one of these couples and facing difficulty in your relationship then you can talk to an astrologer. A genuine astrologer can guide you well.