Aries Man And Libra Woman Compatibility From Every Aspect

Look Over The Aries Man And Libra Woman Relationship Compatibility

Aries Man And Libra Woman Compatibility From Every Aspect

Libra being an air sign is balanced and charming, whereas female Aries is ruled by the fire sign which makes them adorable, and playful. As soon as these two fall in love, one can easily believe that they are destined to be together. This clearly indicates a high Aries man and Libra woman compatibility.

The depth of their love can only be measured with the amount of effort they are ready to put into their relationship. The partnership between this duo is filled with respect and admiration. Although there come some instances where Aries male might get a little envious of his Libra woman.

In this blog post, we will discuss the Aries man and Libra woman compatibility from every aspect. Let’s explore how well these poles apart zodiac sign couple complement each other.

The table below shows the degree of compatibility between Aries man- Libra woman. 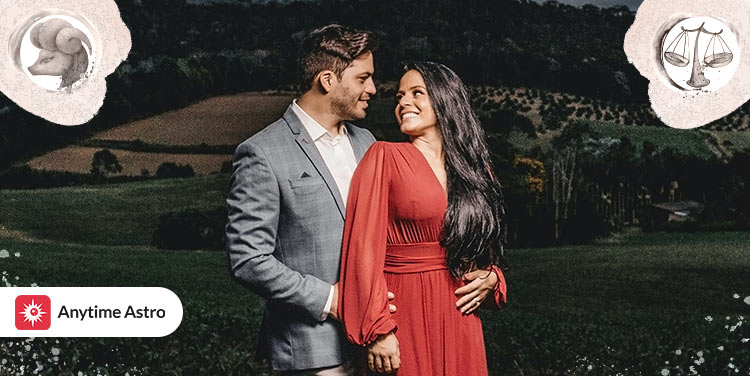 Aries man and Libra woman are said to connect instantly when they meet each other because their thinking process is much alike. Their strong instincts are one of the reasons that bring them close to each other. This automatically makes us believe that Aries' best compatibility is with Libra too.

They are ruled by the opposite elements which can lead to some twists and turns in their relationship.

Male Aries is under the influence of planet Mars which represents powers, deeds, and aspirations. It also makes their natives aggressive, impulsive, and a bit furious. While the female Libra natives are ruled by Venus which itself is a planet of love thus, Libra natives are sensual, romantic, and sympathetic.

Libra Woman and Aries Man or Libra man and Aries woman compatibility can get stronger once they truly and deeply fall in love with one another.

A passionate air sign Libra who gets smitten with the charming and innocent Aries usually blends harmoniously, giving it just the right amount of oxygen to keep the flames of fire high. Libra may envy Aries at times, but it's more of a mutual admiration than a disagreement. You can also try to go for astrology reading to have a better understanding of your relationship.

Male Aries is drawn to the charismatic persona of the female Libra which makes them feel the sudden romantic attraction towards each other. Libra woman is tender and gentle and constantly admires her Aries soulmate.

This dynamic duo has an immediate love connection in their relationship. This Aries male and Libra female love compatibility thus have a good chance of success.

The Aries male and Libra female take their time so that they can have a better understanding of each other. This is one of the aspects which makes any relationship stronger.

This couple has an open mindset which makes them optimistic thinkers. This approach does not refrain them from accepting their faults and flaws and once you accept your mistakes majority of the problems get solved automatically.

His Libra soulmate always makes sure to not say anything negative that can be hurting or bothering her partner. This automatically makes Aries Libra’s best match.

They also have a great level of understanding when it comes to their physical intimacy because male Aries is sensual, passionate, and sensitive, whereas female Libra is romantic, affectionate, and charismatic. So, they basically give each other their missing pieces.

Aries man and Libra woman relationship compatibility can get stronger with time if they both learn to grow and accept each other’s flaws.

Male Aries has to acknowledge the fact that he doesn’t become too demanding or authoritative in the relationship. He should also let his Libra partner speak her heart out. Giving the desired amount of freedom to your partner can really add up to your healthy relationship.

But you can still talk to an astrologer on call if you want to get the best remedies related to the relationship. These experts can help you in an unthinkable way.