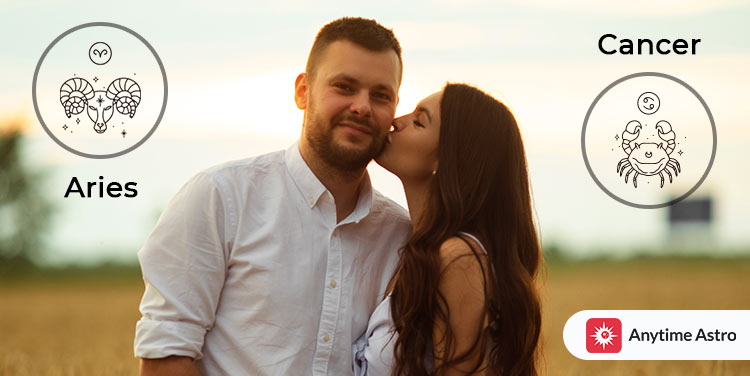 Want To Know Your Compatibility?

Wonder what can happen when Aries man and Cancer woman gets into a relationship?

Cancer woman is sensitive and moody, while Aries man is enthusiastic and energetic.

Together they can be a duo of gentleness and warmth as Aries is a fire sign and Cancer is a water sign.

Aries man and Cancer woman compatibility can soar up at times but this couple will try their best to get things back to normal. This is what it takes to make a lovely couple.

Are you curious to know Cancer woman and Aries man compatibility? Want to know how the fire of Aries deals with the gushing waters of Cancer? Well, then keep reading!

Aries male is governed by planet Mars which makes them aggressive and energetic while Cancer female is ruled by the Moon which makes their natives intuitive, emotional, and thoughtful.

When an Aries man gets into a relationship with a Cancer woman she can feel safe and secure around him. A female Cancer is admired by her partner due to her caring, empathetic, and emotionally strong nature. Whereas, a Cancer woman is attracted to the loyalty and trustworthy characteristics of her Aries Soulmate.

Whether it is Cancer man and Aries woman compatibility or Aries man and Cancer woman compatibility, it can be both exciting and a matter of heated arguments. But as long as these two decide to make things calm and cool between them, they are surely going to have a strong and lasting bond. And also, Aries male tried to shower his partner with positive energy and strength which will further strengthen the Aries male and Cancer female relationship. 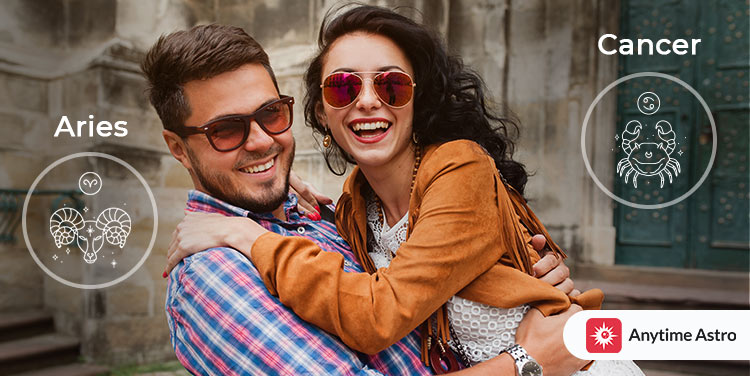 Aries man and Cancer Woman in relationship appear charming to others so it is obvious to witness their admirers. In a relationship, this couple prefers taking things slow. They try their best to get a better understanding of each other before moving further.

There is no one as romantic as an Aries man in a relationship and her Cancer girl feels so lucky to have him as a life partner. Although their relationship depends on who takes the lead (not in a controlling way).

This couple is known for their loyalty and this trait makes them believe that their partner is perfect for them. They can hardly get bored of each other because Aries man constantly tries to add fun and thrill to their relationship. On the other hand, the intuitive abilities of a Cancer woman help her in acknowledging what her partner wants.

When it comes to the Cancer woman and Aries man physical intimacy, they don’t have similar preferences. Aries male tend to take things at a fast pace in bed and they hardly build an emotional connection with their partner, while Cancer woman like to be gentle and tender. These dissimilarities can sometimes create issues in their relationship but they can be mended if they both decide to work on their flaws.

Apart from it, the Cancer female will always shower her care and love to his partner and Aries male will be more than happy to receive this. And this makes for a strong Aries man and Cancer Woman marriage compatibility.

Also See: Aries And Cancer Compatibility - All You Need To Know

Aries-Cancer love match has an average level of understanding in their relationship. Aries man in a relationship dislikes it when her partner becomes clingy. He feels like someone is snatching his freedom and independence.

This couple has different perspectives and opinions on so many things, especially in monetary matters. Female Cancer values money because it gives a sense of security and stability to her while her Aries partner is least bothered about his monetary stability.

He rather feels grateful for the relationship that he shares with his Cancer soulmate because he believes that money is something that will come and go but relationships last forever.

Aries male and Cancer female can have a great level of understanding if they decide to talk about their relationship issues more often and this makes us wonder who is Aries most compatible with?

Their love match is a fun and exciting one. People really admire this duo. Male Aries is always finding innovative ways to keep the spark of his relationship alive. This thing never lets the two get bored of each other.

Cancer woman is attracted to their man’s bold personality and goal-oriented nature and Aries man entices their woman’s caring and loving nature. And this makes Aries the Cancer best match. All in all this duo feels satisfied with one another on so many things.

Not everything is a bed of roses in their relationship. The couple may have to overcome some hurdles if they are going to establish a peaceful bond. Their general financial situations will be a concern since she is cautious in her monetary matters whereas he is free-spending.

In order to sustain a beautiful relationship, they should approach money problems as well as love equally. When she is feeling low, he has to be attentive to her and ask what is troubling her rather than losing his temper and abandoning her on her own. To bond well with him, she needs to trust him in everything he does, as well as give him the independence and freedom he needs.

Overall, Aries man and Cancer woman love compatibility can be reconciled, but only if certain things in the relationship are addressed and taken care of. Every issue in a relationship can be resolved if two souls decide to stick together. If you are also facing compatibility issues but are clueless about the solution then you can always chat with astrologer to get effective guidance.