Open
Home Astrology What is Nadi Dosha in Kundli Matching? Find and Remove It

What is Nadi Dosha in Kundli Matching? Find and Remove It 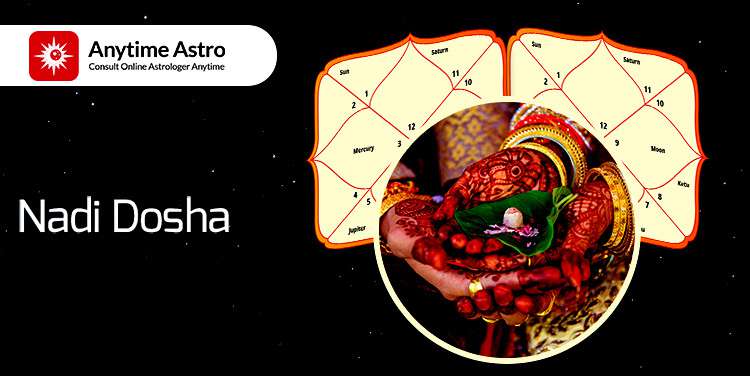 What is Nadi Dosha in Kundli Matching? Find and Remove It

As per Vedic astrology, marriage is an important event in someone’s life and there are various factors in the cosmos that influence the lives of couples. Thus, to understand the impact and ensure longevity and marital bliss, couples should always check their zodiac compatibility and perform Kundali Matching before marriage.

Kundali Matching or Horoscope Matching is the rigorous process in which the Kundali or Birth chart of the bride and groom are matched based on the Ashtakoota method. In this method, astrologers check eight Gunas and predict the compatibility between the couples.

Nadi Guna or Nadi Koota is one of the eight and important Gunas that are analyzed while matching the Kundali of the bride and groom. It comprises maximum points and if a couple has low Nadi Guna Points, then they suffer from Nadi Dosha in Kundali. It is believed that couples with Nadi Dosha in their Kundali should not marry as it may lead to health issues, marital conflicts and various sufferings.

But what exactly does Nadi Maha Dosha mean? Does Nadi Dosha really matter? What happens if Nadi Doesn’t match? Can Nadi Dosha be cured? All these questions are answered in this post. Read on to know!

Get expert astrology advice to cancel Nadi Dosha. Tap for free astrology consultation for marriage problems and Doshas in your marriage horoscope.

What is Nadi Dosh in Kundali Matching?

Nadi Dosha occurs when the Nadi or Naadi of two proposed partners is the same. As per Vedic astrology, Naadi Guna ensures compatibility between couples psychologically and genetically. Thus, out of 36 Points in an Ashtakoot Janam Kundali Matching, Nadi Koota is assigned with 8 points that are the maximum points assigned to any other Kootas or Guna. Nadi Dosha is a very serious flaw or Dosha in Kundali and hence, it leads to various problems in the marital life of couples.

The 27 Nakshatras of Astrology are divided into three Naadis. Read to know about the Nakshatras that fall under each Nadi.

How to Find Nadi Dosha in Kundli?

If the Nadi of the boy and girl is different, the Nadi Koota score will be 8, such a couple will have a blissful married life.

If the Nadi of the boy and girl is the same, then Nadi Koota Score will be zero and couples will suffer Eka Nadi Dosha in Kundali Matching.

How to find Nadi Dosha by date of birth? You may find your Nadi Koota score and know about the presence of Nadi Dosha in your Kundali with the help of the Nadi Dosha Calculator.

There are certain astrological combinations that result in the cancellation of Nadi Dosha. Here are the Nadi Dosha Cancellation rules as per Vedic astrology.

According to Vedic Astrology, three types of Nadi Dosha can be found in a horoscope. Each Nadi Dosha represents the primary qualities or Prakritis- Vaat, Pita and Kapha (Wind, Bile and Phlegm) respectively.

How to Remove Nadi dosh?

Nadi Dosha can be alleviated, canceled or eliminated before or after marriage with Vedic astrological measures. With effective astrological remedies for Nadi Dosha, one may easily nullify this Kundali Dosha and bring happiness and marital bliss in your life.

Nadi Dosha Nivaran: Here are the effective remedies for Nadi Dosha that are effective to nullify and alleviate the malefic effects of Nadi Dosha in the horoscope.

Nadi Dosha is vital and very dreadful. It may have long-lasting effects on your married life. Take no chance and match your Kundali before marriage. Always Ask an Astrologer to create your Kundali and get accurate analysis for leading a happy and blissful married life.

Want to know if you have Nadi Dosha in Kundali? Get your Kundali Matching report analysis and also check Nadi Dosha Cancellation online and astrological remedies for Kundali Dosha.