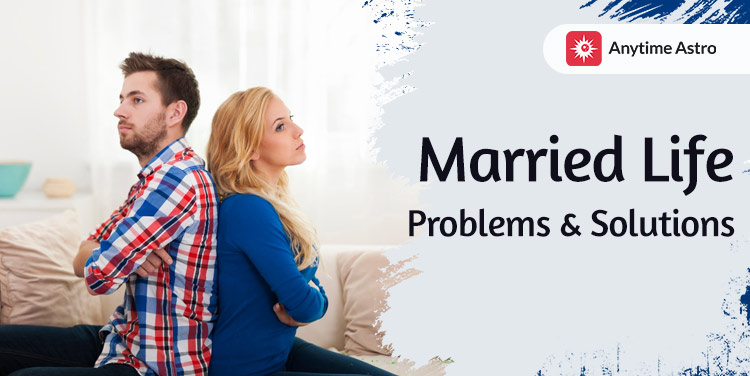 Although marriage is a happy union of two individuals, there are times when it turns into the person's least desired relationship. After getting married, the partners may argue right away, or they may lose their affection for one another over time and that is when the married life problems begin. Couples may argue, disagree, and ultimately hate each other for a variety of reasons, but astrology approaches married life problems from an entirely different angle.

Astrology can pinpoint precise married life issues and offer solutions. Bad planetary influences in our birth charts that somehow tie into our former lives are the cause of difficulties in married life. Readings from past lives may be able to explain why you are having problems in married life. After proper diagnosis and consultation, Astrology most surely aids in the resolution of marital issues for even the worst marriage problems. To make a true marriage prediction, a number of factors must be examined, which can only be done by an experienced and knowledgeable astrologer. Talk to a professional Astrologer.

The most significant choice, getting married, should always be made with astrological advice. The main cause of married life problems between the partners is typically a lack of mutual compatibility. It is advised that everyone undergo a Kundli matching before getting married in order to determine their compatibility and the likelihood that their union will last and prosper. Some common marriage problems include communication gaps, too much interference from in-laws, low compatibility, dominance, etc.

The good news is that Astrology deals with both, common problems and possible solutions to married life.

Read About: Marriage Date Prediction By Date of Birth

How an Astrologer can help you to live happily in married life?

Our birth chart contains a wonderful record of how we have lived throughout our lives. It may be used to see through anything. As soon as an Astrologer glances at the native's birth chart, they may tell that the native has married life problems. Married life issues can be hinted at by the seventh house and the ailment of its lord. It's crucial to realize that Astrological remedies also function if Astrological combos or yogas do. Astrologers can help you with married life problems and their solutions. The only person who can make an accurate marriage prediction that addresses the issue in its truest form is a knowledgeable Astrologer.

To counteract the planet's negative influence, remedies are used. Once the bad energy is lessened, the native begins to reason. The local's environment and actual family members support him or her in enhancing their marriage. You will be astounded by the effectiveness of Astrological cures, such as gem jewelry, rudraksha, almsgiving, mantra japa, yantra, and puja.

Astrology can help you with common problems and possible solutions to married life. Once relations become very bitter, it is common for people to decide to live separately or get divorced. However, it's not advisable to make decisions in the midst of hustle and bustle. No matter how much you dislike someone, you can't break up with them just because you don't like them anymore. Although someone may dream of living happily with another partner after divorce, a problematic 7th house will not let you settle no matter how many partners you change! While there are different houses for different numbers of marriages, the 7th house remains the main house of your marriage. If you break up with someone, it is not necessary that you will find another partner who is more compatible with you. Moreover, troubles in marriage can also affect the native's career and work, since the 7th house is associated with both. If you want to understand what your marriage really looks like, you need astrological guidance. An astrologer might show you something you've missed! Talk to a professional Astrologer.

Q1. What are the most common marriage problems?

Q2. What is the worst marriage problem?

Ans. There are numerous married life problems and the degree to which they are affecting you depends on a lot of factors but the top marriage problems and solutions can be provided by Astrology.

Q3. Is it common to face difficulties in married life?

Ans. Yes, a lot of people these days face marital problems but one should never give up on their bond and always seek help for the same as everything can be fixed. Astrology is the best way to get married life problem solutions.