Marriage Horoscope 2023: Get Insights To Your Ideal Life Partner 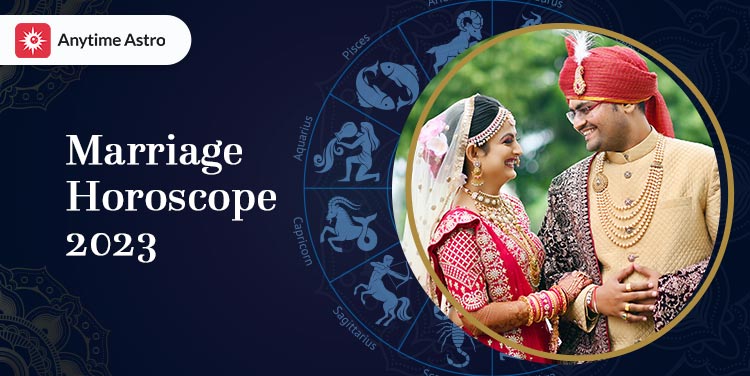 Marriage Horoscope 2023: Get Insights To Your Ideal Life Partner

The most anticipated and desired occasion in everyone's life is their wedding. This astrological chart thoroughly analyzes all your houses to provide true marriage predictions and replies to the questions such as "when will you marry?" and "who would you choose as your husband and bride?

The Love marriage astrology predicts that Aries Zodiac Sign may go through ups and downs in the upcoming year. The majority of married people may have negative circumstances this year as a result of Rahu's shadow and Ketu's placement in their first and seventh homes from the beginning of the year until October 30.

Aries's marriage prediction indicates the sign of a happy married life. Jupiter will help you in completing your wishes towards personal and family life as well.

The astrological charts of the individuals indicate positive signs in the Taurus marriage horoscope prediction 2023. Sun and Venus may make it possible for bachelors and singles who are hoping to get married and find a lifelong mate.

It would be ideal to start a new life now that both planets are in steady positions in the love horoscope. There will be many wonderful times with your companion this year. Your relationship with your partner will be solid.

Additionally, those long-term lovers who live in the area and are loyal to one another may get married this year.

The Gemini love marriage astrology for 2023 has a lot to say for those who want to take their romance further. 2023 is the ideal year to tie the knot. Marriage is another option for those who enjoy dating. Although whatever you decide to do with your future, your family and friends will support you.

If you are not sure about your current partner, it would be best for you to wait for a while.

According to the Cancer 2023 marriage prediction, 2023 will be a regular year for married couples. At the start of the year, relationships are most likely to shift. Saturn is in your horoscope's seventh house, which indicates that there may be issues in your marriage. There will be conflict and hostility in the relationship, which could strain the intellect.

People who are eligible for marriage or looking for a love marriage would be blessed by Jupiter and along with good fortune.

Let’s see what this free marriage horoscope predicts for leos on what to expect and what to overlook in the upcoming period.

Leo is a devoted and responsible partner despite being viewed as a self-centered and attention-seeking member of the astrological family. Trustworthy and compassionate Leos give their friends a lot of thought, care, and protection.

This is the perfect time to meet your ideal mate, even if you are single. There is a significant probability that this meeting will occur with the aid of a third party or a family member.

Will these perfectionists also have a flawless union? Let's find out with the help of this free marriage prediction 2023.

Virgo puts a lot of effort into relationships. As long as they feel required, they are prepared to put all of their effort into it. But Virgos hesitate before entering a relationship to make sure that their time and effort will be worthwhile. The sign often attempts to resolve any flaws in the partnership, although they are constantly on watch.

This year's love marriage astrology shows the movement of the planets, constellations and also portrays those kindhearted people who are engaged in a committed relationship and getting ready to get married. This year might not be good for them, especially from April to October. Due to the Rahu-Jupiter conjunction at this time, "Chandala Yoga" will develop in the ninth house. Therefore, for residents who wish to propose to their partner, before April or after October would be suitable.

The most compassionate of the Zodiac Signs, Libras will adore and cherish their partner. But because of their balanced nature, they are also attention seekers and will demand your equal worship. Despite their laid-back demeanor, Libras are quite attentive when it comes to relationships and don't enjoy playing games.

For Librans who are still single and hope to get married this year, the time period, particularly from July to September, may not be favorable. Venus will be in retrograde during this time, so you shouldn't make any marriage-related decisions.

One can have both a hellish and heavenly experience in a relationship with a Scorpio Zodiac Signs. Scorpios will try to understand you, accept your inner beauty and demons, and assist you in solving your difficulties. They anticipate their spouse to do the same in response. It takes them some time to trust and be vulnerable with someone since they get envious fast.

To better comprehend, let's learn more about the Scorpio true marriage prediction for 2023.

Jupiter, the lucky planet, will be in your zodiac's fifth house from January to April, thus those thinking about getting married to their significant others will be successful. Additionally, there will be plenty of attractive marriage proposals available to single folks.

As the year begins, the stars are aligned in favor of Sagittarians and they are lavishly blessing the affairs of love and partnership.

Additionally, the free marriage prediction encourages you to proceed with prudence. Venus will be retrograde in the final week of July, which could cause natives who want to wed their partner to fall between the cracks. If you are interested in marriage or want to propose to someone, the time period from July to September will be quite unfavorable for you.

According to the Capricorn’s free Marriage prediction for 2023, The period between April to July is especially advantageous for you if you've been in a committed relationship for some time and are thinking of introducing your spouse to your mother or other family members, Because of this, Venus's retrograde, which starts in July, could pose problems for you.

However, from April to October there will be "Chandal Yoga" due to Jupiter and Rahu conjunction in the fourth house. Because of this, some residents will have a lot of trouble getting married and having a successful relationship. Therefore, you should hold off on making a marriage or love marriage proposal right now.

Aquarius’s true marriage prediction for 2023 tells that Venus will provide you warmth and a wealth of sensual sensations as the year 2023 gets underway.

This time of year will also bring disappointment for individuals who are unable to get married. In July, Venus will start moving retrograde, and it will stay there until September. Making any marriage-related decisions from July to September will be incorrect in this scenario.

Pisces’s marriage horoscope prediction for 2023 tells that you might feel energized and inspired to add charm and love to your connection.

Venus will be retrograde from July to September, which might be problematic for those who have just started a new relationship or are seeking for marriage proposals that are right for them. Because if they don't get the opportunity they wanted during this time, they could get depressed.