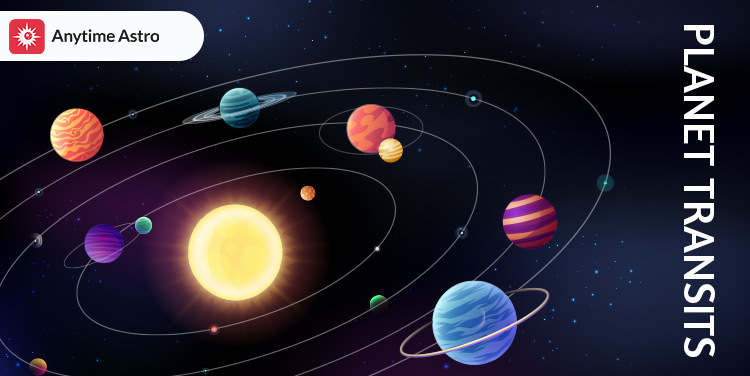 Planetary transit refers to the movement of the planets through the zodiac sign. Astrology refers to this movement as "Gochar." These transits can affect the Zodiac signs in various ways. If you want to know how the Transits of 2023 will affect you, Connect with our top Astrologers!

According to each person's unique birth chart, the effects of the planets moving from one house or sign to another or from one sign to another sign are shown. Each planet orbits the Sun at a different speed, and each transit occurs at a different time. The transit table also derives that the planets may go retrograde or combust during the transit time.

Generally speaking, Saturn, Jupiter, Jupiter's nodes, Rahu, and Ketu have long-lasting effects. Quick changes are brought about by the transits of nearby planets like the Moon and Mercury. The birth chart of a person is always used while analyzing a planet's transit and its effects. Below is a list of all the planets' 2023 transit information for your convenience:

Planets Transit 2023 And Their Timing

Antar Dasha condenses the findings and their timing inside a narrow time limit that Prolonged Mahadasha specifies. The likelihood of expected outcomes is significantly diminished by planets transiting during Dashas. The list of approximate times that each planet spends in each zodiac sign is provided below.

Planet Transits and Retrogrades in 2023

Let’s dive deep into all the transits that will happen in 2023, for all the 9 planets and their effects.

The Sun is regarded as the "King of the Planets" in Vedic astrology and symbolizes a person's soul, self, personality, ego, and other distinctive traits. How powerful or influential a person is in their life is determined by the Sun's placement in their birth chart. The sun is seen as a potent planet that controls a person's father, other masculine influences, health, outward appearance, and behavioral characteristics. Sun also strengthens a person's ability to overcome obstacles and develops their personality and qualities. defines.

Mars is referred to as the aggressive and ruthless planet in Vedic astrology. The native's mind and intellect are sharpened by this planet. Because Mars is the factor of courage, man performs courageous deeds as a result of its impact. Mars is also referred to as Bhaum since he is also known as the "son of the land" in mythological traditions.

The planet Mercury has been granted the status of a prince in the new planetary system, according to Vedic astrology, and it is particularly the planet that governs intelligence, discretion, speech, business, and communication. When Mercury is strongly placed in a person's horoscope, he benefits in business and has excellent reasoning abilities. Such a person has a keen interest in information acquisition and thinks far into the future.

In Vedic astrology, Jupiter, also known as Dev Guru, is regarded as a particularly lucky planet. Jupiter is the planet of knowledge, accomplishments, wealth, and union. The person becomes more interested in religion and spirituality under the influence of Jupiter. If Jupiter is lucky in your horoscope, you will receive assistance even when things are difficult.

Venus is one of the nine astrological planets and also a highly unique planet. It's said to be a sign of luck. Venus' lord is none other than Goddess Lakshmi. Venus is regarded as a woman's planet. Venus displays its influence in the same way as other planets in the horoscope.

Saturn is regarded as unique among all the planets since it is the god of justice and action. Their fundamental duty is to treat everyone fairly. It is the impotent, black-colored, air-element lord of the west direction. Saturn is regarded as the planet of physical prowess, hardship, yoga, sovereignty, salvation, renown, employment, unconsciousness, etc.

In Vedic astrology, Rahu is seen as a terrible planet. Despite not technically being a planet, Rahu is very significant in astrology. Rahu and Ketu have the same name because they both move at the same speed but in opposite directions. Rahu-transit Ketu has a significant influence on daily living. Together, these planets alter the zodiac, and their motion is inherently crooked.

In Vedic astrology, the moon is the planet that moves the fastest. In two and a half days, the moon will change signs. As a result, this planet has an impact on each zodiac sign depending on its passage. This impact, though, is transient. There are times when two planets in the same zodiac make a yoga. Some yogas are lucky, while others are unlucky. The Moon is regarded as the lord of the mind in astrology. The Moon's impact affects a person's mental stability or restlessness. All forms of jobs have challenges. Every sign of the zodiac is impacted by the moon.