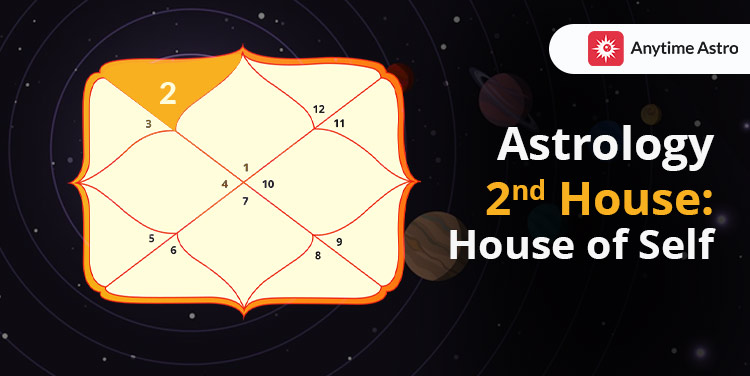 Eager to make a fortune?

The second house in Vedic Astrology is also known as Dhana Bhava and the ruling zodiac of this house is Taurus. Venus is the ruling planet and it is also known as House of Wealth and Family. It is the most favourable house for Moon, Mercury, jupiter, and Venus.

What is the second house in Astrology?

The second house according to Vedic Astrology represents the relationship of an individual with their family and finances. It is about the harmony of values and morals of an individual with those with one’s family values and traditions. This house helps in understanding the fnanacial status and path one chooses to earn money. This can be easily understood through Kundali analysis and plays an important role in Kundali matching for understanding family wealth and values.

What do different planets in the second house indicate?

The second house of Astrology, related to the sun as the strong planet, speaks about wealth, values, and family relationships of a native. The Sun in the second house in a Janam Kundali influences a person to be egoist and greedy. These people are many times perceived as greedy and self-centered. Natives with Sun in the second house in a Birth Chart are strong, independent, and have dominant personality traits. These people easily get into fights and suffer strained relationships with family members because of ego clashes.

Know About: Astrology Houses & Their Significance

According to Vedic Astrology, Moon in the 2nd house blesses the native with an attractive and pleasing personality. The native has a magnet-like personality that leaves people impressed. These people are emotional when it comes to their family. They face a healthy childhood and a loving and caring brought up. They are family lovers and go beyond boundaries to protect their family.

Natives with the Moon in their 2nd house get into family business and like to take forward their legacy. They are family oriented people who love family traditions, values, and culture. The close knit with their family and relatives make them the hirers of ancestral wealth and properties.

The 2 house in astrology consider Jupiter to bestow the native with prosperity and wealth. The native experiences happiness and respect in society because of favorable Jupitar in their Kundali. Jupitar is considered a Guru and consequently, it influences the native to choose occupation that of a teacher, professor, educator, preacher, priest, consultant, divine figure, or a businessperson.

Jupiter is an indicator of expansion and the wealth and possessions of an individual with Jupitar in the 2nd house of astrology increases profusely. These people are more investment oriented rather than incurring expenses, building wealth for themselves and generations to come. These are also blessed with inheritance possessions.

Mercury in the second house in a Kundali exhibits a practical and intelligent native. Mercury is associated with knowledge of numbers and such individuals have great analytical skills and pragmatic outlook. These people are great influencers because of the knowledge they gain and the articulation of thoughts. Natives with Mercury in the second house of Vedic Astrology get into the business or profession of financial planner and advisor, Chartered Accountants, lawyers, staticians, and mathematicians.

Mercury in the 2nd house in Astrology is a strong position for financial growth and stability. The individuals never face financial crunch and observe growth in their finances and wealth. The weak mercury influences the native to make poor financial decisions.

Venus in the second house in a birth chart exhibits luxury and comfort. The native has an inclination towards art and music. They become collectors of fine things and enjoy the wealth they possess. With Venus in the 2nd house in Astrology, the native chooses a career in fine arts, architecture, designing, music, literature, jewelry, and food. These people are affluent, possess great collectibles, and have an admiration for art.

Venus bestows the native with an attractive personality and appealing eyes, face, hair, and voice. It opens many channels for the native to earn money and give them a desirable reputation in society.

According to Vedic Astrology, Mars in the 2nd house is not a favorable position. This makes an individual aggressive and mean. Such natives like to work alone but they are hard workers and earn money through fair means. The natives with Mars in Astrology 2nd house work with morals, ethics, and values. They stick to their principles and have an authoritative personality. 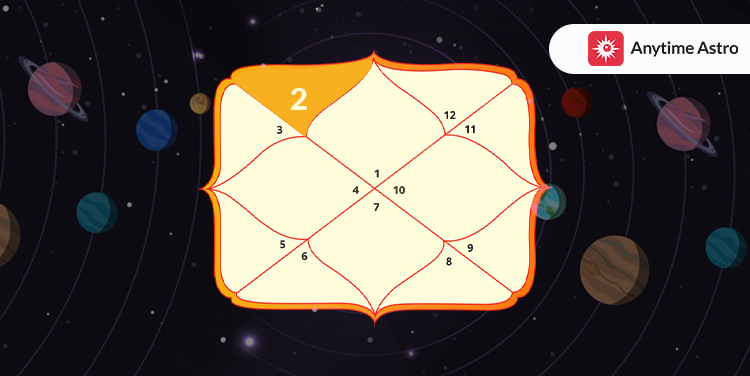 Natives with Mars in the 2nd Astrology house do not know how to manage their finances. They are poor at investing and saving activities. They get into professions of doctors, surgeons, engineers, armed forces, sportspeople, and adventurous fields.

The second house in Vedic Astrology considers Saturn in a janam Kundali to be unfavorable. It leaves the native in poor wealth conditions, though they can make money through hard work. The natives tend to be miser and do not make investments at all. This leaves them with stagnant wealth and possessions.

The natives with Saturn in the second house in Astrology face a difficult childhood. They are brought up in a strict and restrictive environment, making them bitter and rebellious. They separate from their houses early and make wealth through their hard work and dedication.

Rahu is a shadow planet and its position in the 2nd house in Vedic Astrology is considered unfavorable for a native. The person has values different from the family traditions and leaves the family soon to follow own righteous path. The person if gets into the wrong company indulges in unethical acts.

Though the second house occupied by Rahu in Vedic Astrology may provide the native with unexpected wealth benefits, the native’s overspending nature becomes a concern. A person earns respect in the family because of the money earned by them irrespective of their ways of earning.

Know About: Astrology 1st House Meaning and Its Significance

According to Astrology, if the 2nd house is occupied by Ketu in a Janam Kundali, the person has poor family relationships. They do not relate themselves with their extended family and ancestors. This is mainly because of the conflict with the family values and traditions with which they were raised with the ones they adapt to over the time.

Such natives do not value money and possessions and consequently face financial difficulties. They are conscious of self image and dubious of one’s talents and worth.

The position of these planets effect the Kundali of a person individually, as well as collaboratively with the position of other plantes. These should be studied collaboratively through a Kundali analysis to get the right interpretation of the effects of the position of planets on a native’s life. If you want to learn more about the implications of your ruling planet in the second house of your Kundli according to Astrology, get your Kundali analysis from an expert Astrologer and chat with them to find solutions to your problems.