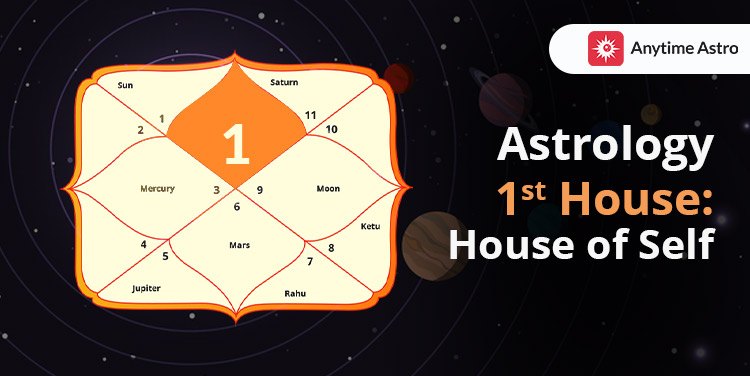 Want to understand your personality traits?

The Astrology 1st house is the House of Self. It is also known as Tanu Bhava meaning the body of self. The first house in a Janam Kundali is the representation of one’s image perceived by others and the image one sets for oneself. It represents the personality of an individual including appearance, body structure, charm, characteristics, and features.

The 1st house in astrology is dominated by Aries. Mars is the ruling lord of this house in a Kundali and suitable for Sun, Moon, Jupiter, Mercury, Mars. It is a weak house for Saturn and Venus, negatively affecting a native’s Kundali.

The first house in Vedic astrology is responsible for shaping one’s personality. It influences the way a person thinks and how they respond to their environment. It is associated with self-realization and the path one chooses to follow in their life. It shapes the thinking process, presentation, and life choices of a native that they choose in their journey of life.

Know About: Astrology Houses & Their Significance

What is the significance of the 1st house in astrology?

The zodiac 1st house is the representation of one’s temperament. It speaks about one’s choices, likes and dislikes, path they prefer to walk on, and the life they desire. A birth chart first house is also a representation of a native’s childhood, bought-up, struggles and challenges they face in life. It is also important for kundali matching for understanding the compatibility of the personalities of two individuals. Therefore, it is important to understand what is the first house in astrology and what it holds for a native, so that their Kundali analysis and kundali matching can be carried out in the right way and remedies can be suggested accordingly.

What do different planets in the first house indicate?

All the 12 houses in a birth chart influence each other. The ruling planet and zodiac in a house have a significant impact on the other houses in a Kundali as per Vedic Astrology. They impact the overall Kundali analysis of a person, so it is important to understand the influence of each of these houses on a person individually as well as combinedly. First things first, let us see the first house in a birth chart to understand its dominant planets and their influence on a person’s personality:

Sun in a zodiac’s 1st house is an indicator of self-confidence and leadership. People with a strong position of the Sun in their first house in a birth chart have a strong personality with dominant traits. They have a great sense of self-awareness and know what they want in life. These people often tend to be self-centered and egoist. A native with Sun in the Astrology first house thrives on challenges and a born fighter. These people tend to be lazy but always up for a challenge.

When Moon is dominant in the first house in Vedic Astrology, it blesses the native with a pleasing personality, but with an immature personality trait. A native tends to be emotionally weak and dependent on others. Such individuals always look for emotional support and approval from others. These people must choose their company wisely because of emotional inconstancy and dependency. This also affects their courses of action and stability in the decision making.

The first house in astrology with dominant Jupiter indicates an optimistic person with never dying enthusiasm. The positive behavior towards life often makes them careless and overlook facts. These natives are compassionate and have a big heart. They are always ready to help others and carry good thoughts for everyone. Jupiter in the first house in a birth chart is an indicator of growth, and it denotes a huge scope of personality growth for the native according Vedic Astrology.

Mercury in the first house in a native’s Kundali exhibits a curious personality. Such individuals want to know and learn everything. These are restless individuals with great intellect because of their curiosity to learn. They adapt to any situation easily and have great influential skills. They are comfortable to be around and indulge into long conversations. They are witty and often react quickly to a situation. The first house in Vedic Astrology with dominant Mercury represents curious and witty personalities that get along well with everyone. 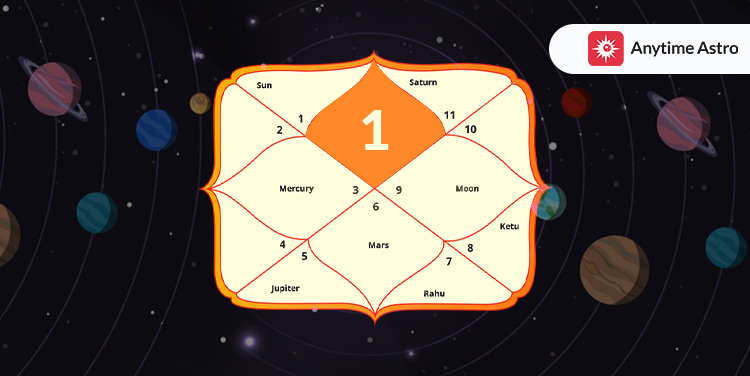 Mars in the 1st house in Vedic Astrology represents impulsive and impatience characteristics of a person. The natives with Mars as their ruling planet in the zodiac 1st house are courageous and powerful. They are aggressive, energetic, and tend to make impulsive decisions. These individuals are quick decision takers and act or react to any situation instantly, often making them regret their decisions.

According to Astrology, 1st house dominated by Saturn influences its native to develop a personality with sincere nature and introvert personality traits. These individuals are serious by nature and they approach life situations with maturity and sincerity. They usually experience troubled childhood and hold bitter memories. Nevertheless, they achieve success and fame in life later on.

If you are still finding your first house astrology personality, Venus may be your answer. Venus in the first house blesses the natives with a pleasing and charming personality. These individuals are charmers and attract people towards themselves. A birth chart first house ruled by Venus in a person’s Kundali is associated with beauty and love, bestowing the natives to be the center of attraction.

Significance of Rahu in the 1st house in astrology is related with the desire for growth and fame. A person with Rahu as the dominant planet in the Kundali has a pleasing personality with a desire for social recognition. A person progresses in life through unconventional ways. The negative effect of Rahu is that it influences the native to get indulged in illegitimate activities and addictions.

The first house in astrology when dominated by Ketu blesses the native with an attractive personality. These people have a natural ability to understand themselves and work on the flaws they have independently. Such natives appear mysterious to others given their progressive nature. The shadow planet Ketu, negatively influences a person’s life with health problems. These people are weak and lack strength and stamina.

The significance of the 1st house in astrology depends on the ruling planets of the house. If the first house in vedic astrology is dominated by a combination of the right planets, then the native lives a successful and happy life. If astrology 1st house is ruled by notorious planets then the native tends to go through a tough life with challenges and failure.

Any transit of the natal planets taking place in the first house of a Kundali also affects a person’s personality. It potentially influences a native’s outlook towards life and their character development. The importance of understanding one’s Kundali in their life can’t be denied and personality is the first thing that must be understood. If you want to know what is the first house in astrology about your personality and future, chat with an expert Vedic astrologer and find the answers you have been looking for.